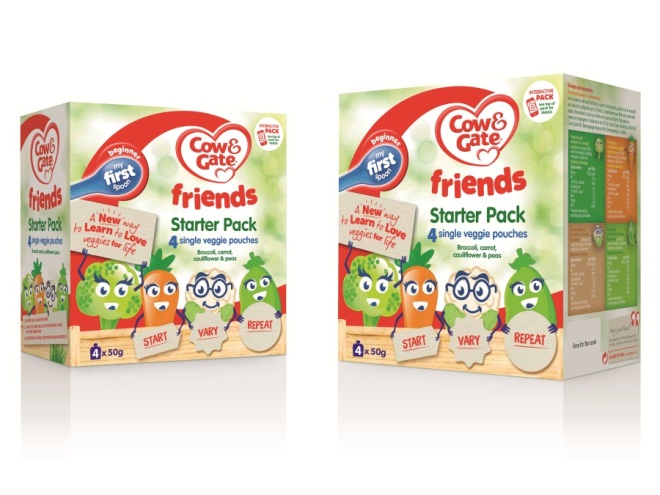 Encouraging babies and young children to eat fruit and vegetables can sometimes be a bit of a nightmare. Weaning wasn’t too difficult for us luckily, but I have occasionally found it quite difficult varying the little mans diet particularly his daily intake of fruit and veg. He will happily munch on things like tomatoes and cucumber but getting him to eat a good variety instead of the same thing over and over can be hard work so I’m always keen to try anything that can help with this.

From the start of weaning at 6 months old I’ve used a combination of home made meals and pre prepared baby food, though I am conscious of the brands I choose. I recently heard about the new Cow and Gate’s Friends range. Separated into four stages – beginner, discover, explorer and friends forever the range is jam packed with nutritious vegetables and encourages little people to learn to love the taste of vegetables on their own, starting off with individual tastes which aren’t disguised by other stronger or sweeter flavours.

Cow and Gate use the phrase ‘Start, Vary, Repeat’ as a simple guide for parents starting on the weaning journey with their little people.

The range starts out with a ‘beginners’ starter pack, containing four pouches, one each of carrot, broccoli, cauliflower and peas.

As you little person grows and works their way through the range additional carbohydrates and proteins such as fish are added to the pouch, resulting in tasty but nutritious meals.

We were sent some of the first stages pouches to try out but they were a little too young for the little man so I popped to Boots and picked up some of the pouches from the later stages of the range. The range is currently on offer 3 for 2 in Boots so you can pick them up for a bit of a bargain at the moment. 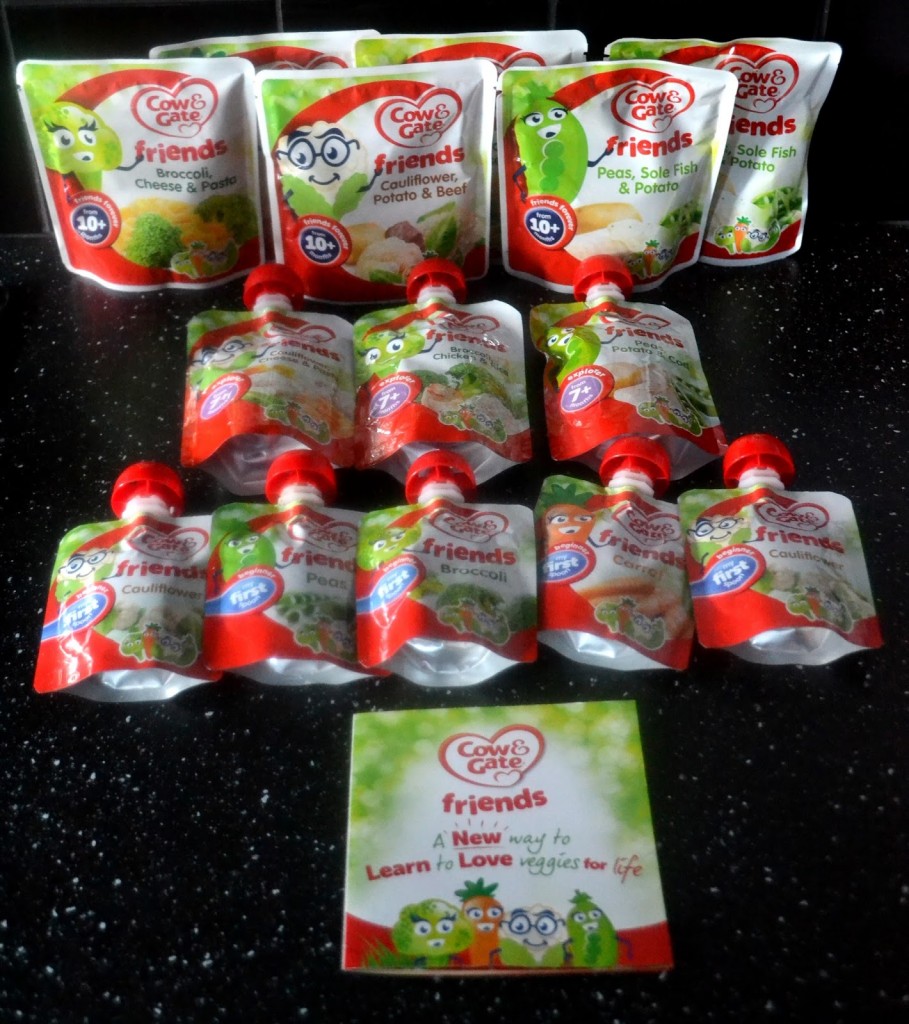 I wasn’t really too sure how the little man would react, as he’s a bit hit and miss with pre prepared baby food. Some days he’s devour a certain meal and then a week later will have the same thing and point blank refuse to eat it, but it seems The Cow and Gate Friends range has been a big hit with the little man. He’s quite happily munched his way through every flavour we’ve tried so far with his favourite being the Peas, Sole fish and potato which is a massive shock as he usually turns his nose up at any type of fish.

I’m glad the meals come in pouches. I’m really not a fan of glass jars. I hate carrying them round in my change bag, they’re heavy and I’ve dropped and broken a few in the little mans tiny life time. Pouches take up less space and fit much better into the side ;pockets of my change back or the back pocket on the pushchair. 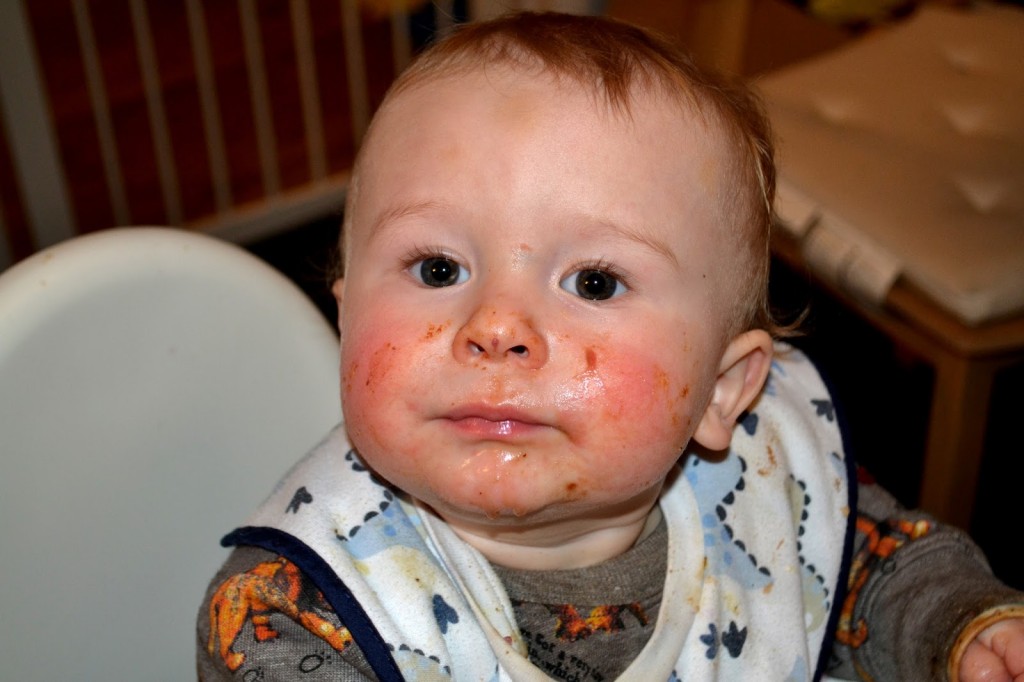 I also really like the fact the range doesn’t contain any odd food combinations. Whilst I’d like the little man to eat anything and be happy to try any flavour, I don’t necessarily agree with completely random flavours mixed together. He will happily eat chicken dipped in yogurt himself, we don’t need it to come in a pouch ready mixed. 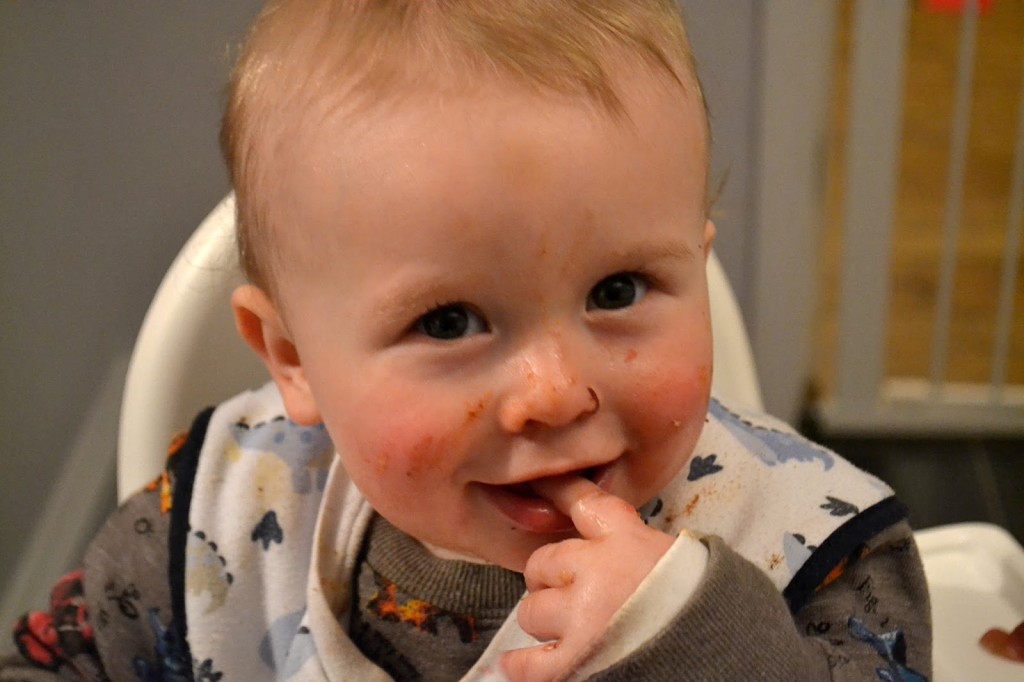 I was pleased to hear that all of the pouches are created with steam cooked ingredients with no added salt, sugar or preservatives which means I have no guilty feelings about using pre prepared food rather than cooked from scratch,

If you’re about to start weaning I would definitely recommend the new Cow and Gate Friends range, but even if you’re in the later stages like us, you should give the range a go, the meals are clearly tasty and healthy and varied for little tummies.