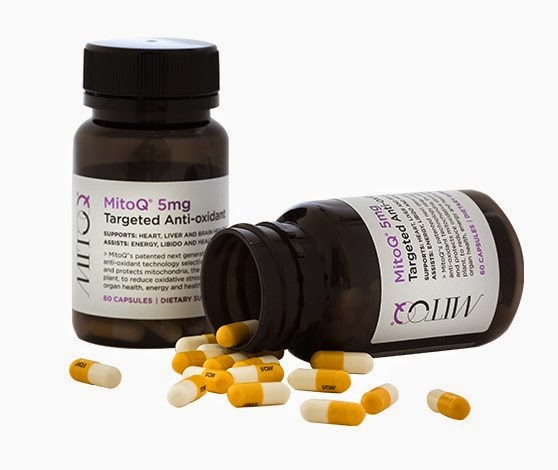 I’ve recently started taking Mitoq capsules which are clinically proven to slow down the ageing process – I’m already sold with that claim! Anything that claims to make me look less like I’m very nearly 30 has to be worth a try.

After over a decade of research, MitoQ dietary supplement capsules have now been launched in the UK. MitoQ, is a powerful antioxidant that selectively targets the mitochondria (the ‘batteries’ in the body’s cells), quenching the damaging free radicals that accumulate there.  It’s the free radicals in our mitochondria that causes skin to age and can even lead to a variety of diseases.
MitoQ was discovered accidently by two leading scientists researching treatments for liver disease at Otago University in New Zealand. MitoQ’s active ingredient is Q, a powerful form of antioxidant and the active component of the body’s own organic antioxidant system CoQ.  They discovered a new method of slowing down the skin’s ageing process by targeting mitochondria in the body’s cells with a powerful antioxidant.
Skin starts to age from when a person reaches 20, because the body’s cellular defence systems deteriorate over time and that’s when the harmful free radicals overwhelm the body’s natural defences.  MitoQ works against this process by replenishing and supporting the body’s antioxidants, which help protect against free radicals and therefore lessen the damage to skin cells which causes the signs of ageing.
MitoQ uses a next generation technology that is scientifically proven to deliver Q to cellular mitochondria at levels 847 times greater than existing Co2Q formulations.

It is now possible to benefit from MitoQ’s unique formula internally, slowing down the ageing process, increasing energy levels, a feeling of wellbeing, clarity of thought and increased libido.
MitoQ has been extensively researched since its discovery 12 years ago.  Recent clinical trials in the US have fund that it enters mitochondria quickly, scavenging free radicals, maintaining or even boosting energy levels.  It is reported that MitoQ has helped with the debilitating symptoms of ME and CFS (Chronic Fatigue Syndrome).  Testing is continuing as MitoQ has shown positive signs of being beneficial in the treatment of MS, diabetes, Alzheimers and Parkinson’s diseases.

MitoQ Supplements contain no animal products and are gluten free.
They are available in individual packs of 60 capsules at £37.50 each or triple packs at £105.20.

I’ve been taking these for roughly a week now and almost immediately after the first dose I felt more energised and awake, which is amazing when you have a 9 week old baby to look after.

The tablets are small and easy to swallow. I do find that if you leave them in your mouth too long they have quite a bitter taste, the key is to swallow them as quick as possible!

In the week I’ve been taking MitoQ my skin seems to have improved, it’s much clearer and brighter and the fine lines on my forehead appear to have gone! Even the huge black bags under my eyes from lack of sleep don’t look as bad.

Obviously I can’t comment on the anti aging effects after a week, but in general I do feel much better in myself. I have more energy and I don’t look as awful without make up so clearly they must be doing something amazing!

*We were sent the product free of charge to review, but all opinions are my own*