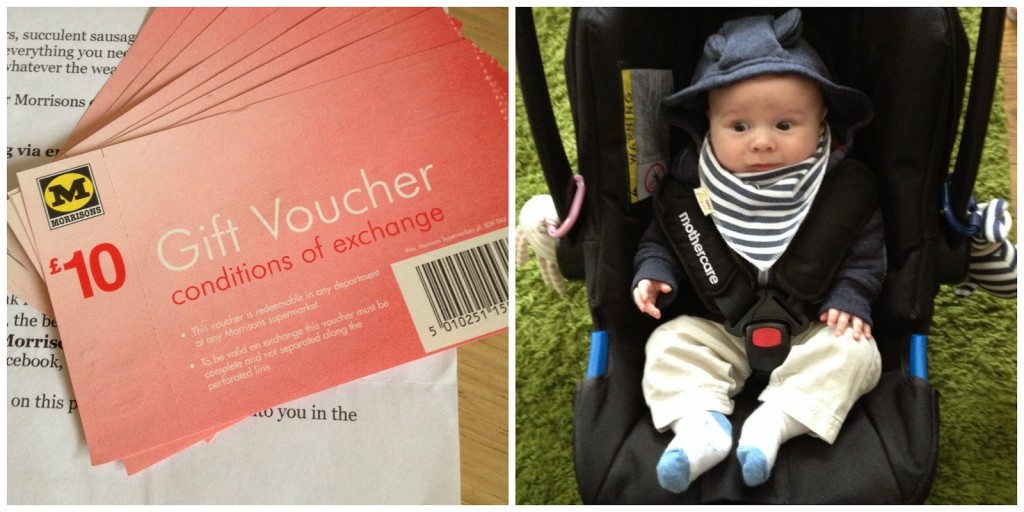 I was lucky enough to be chosen to check out the newly lowered prices at Morrisons as part of
the #MorrisonsMum campaign.
From 1st of May Morrisons have brought in new permanent price cuts on over a thousand of their most popular products. They claim that these are not temporary reductions or supermarket smoke and mirrors, but new every day low prices on things you buy every week and say that you’ll notice the difference with every shop.
I was looking forward to checking out the prices myself while buying our shopping and seeing whether these claims were actually true.
I have shopped at Morrisons previously but found that their prices were creeping up dramatically and we simply couldn’t afford to shop there. I usually buy all of our fruit and veg from a local green grocer and buy the rest online with which ever store I have discount vouchers for, or which ever one has the best deals on. I don’t really have any loyalty towards one store.
Late on Saturday evening I dragged hubby and The Little Man to our local Morrisons to carry out our shop. Until I saw some of the pictures and posts on Twitter from other bloggers involved in the campaign I hadn’t actually realised how small my local store is.

The car park at our local store is huge but it does have an annoying ticket machine. Does anyone else get annoyed by the fact they have to pay to park in a supermarket car park?! There was plenty of disabled spaces and parent and child spaces (though they were miles away from the store entrance).

I was glad to see plenty of baby trolleys. I won’t even entertain food shopping alone with The Little Man as I can never get a trolley with a baby seat so I was pleased to see Morrison had quite a few and they even had the twin baby trolleys.
There were plenty of the bright yellow ‘cheaper’ signs up throughout the store, both above the aisles and on the product displays. 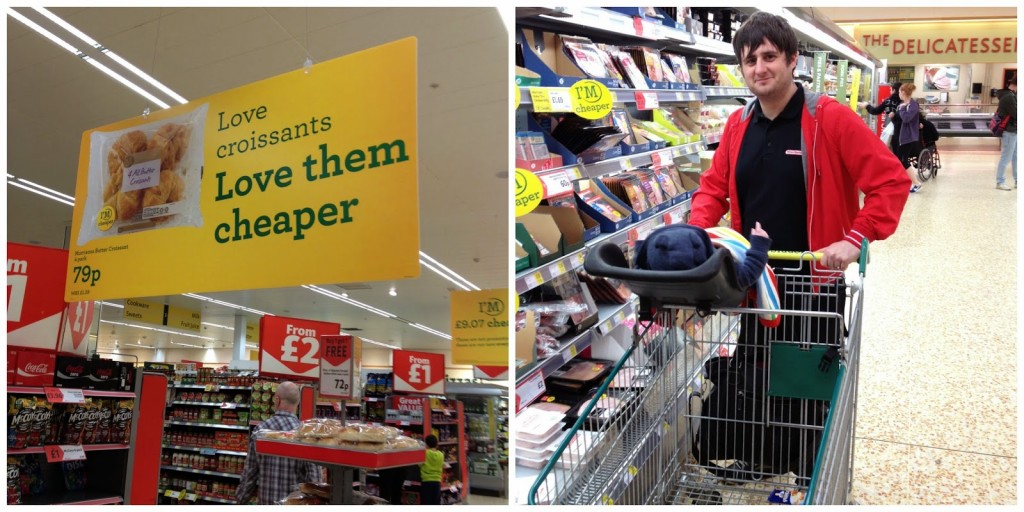 There was a decent selection of fruit and veg which all appeared fresh. I was able to get most of what we’d usually buy but couldn’t get things like Sweet Potatoes or celery.
Our local store had a lot of bare shelves which I was quite surprised to see. I was also quite sad to find the deli, meat and fish counters all closed and cleared by 5.30pm on a Saturday despite the fact the store is open until 9pm!

The checkouts were really quiet so there was no queuing and the lady on the till was fquick, friendly and helpful.
We did our shopping without any fuss, packed it all up and headed home to get sorted for our Bank Holiday weekend. 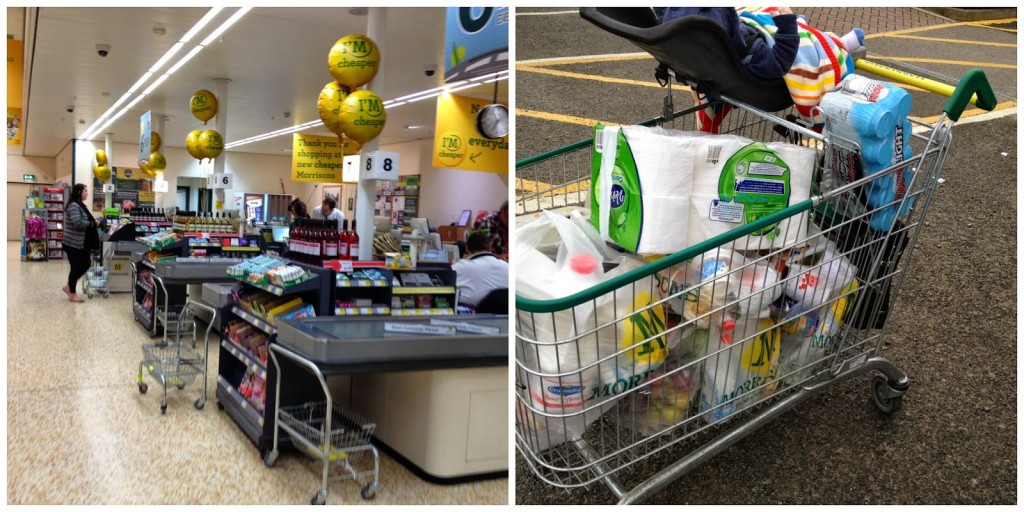 We were able to get about 80% of the items we would usually buy in our fortnightly food shop. I’m following the Slimming World diet at the moment so there are certain things that I buy that my local Morrisons didn’t have including extra lean mince and pork loin steaks. So instead I picked up similar products which were slightly less healthy.
The products that we were able to get though looked fresh and tasty and all had reasonably good use by dates displayed on them. 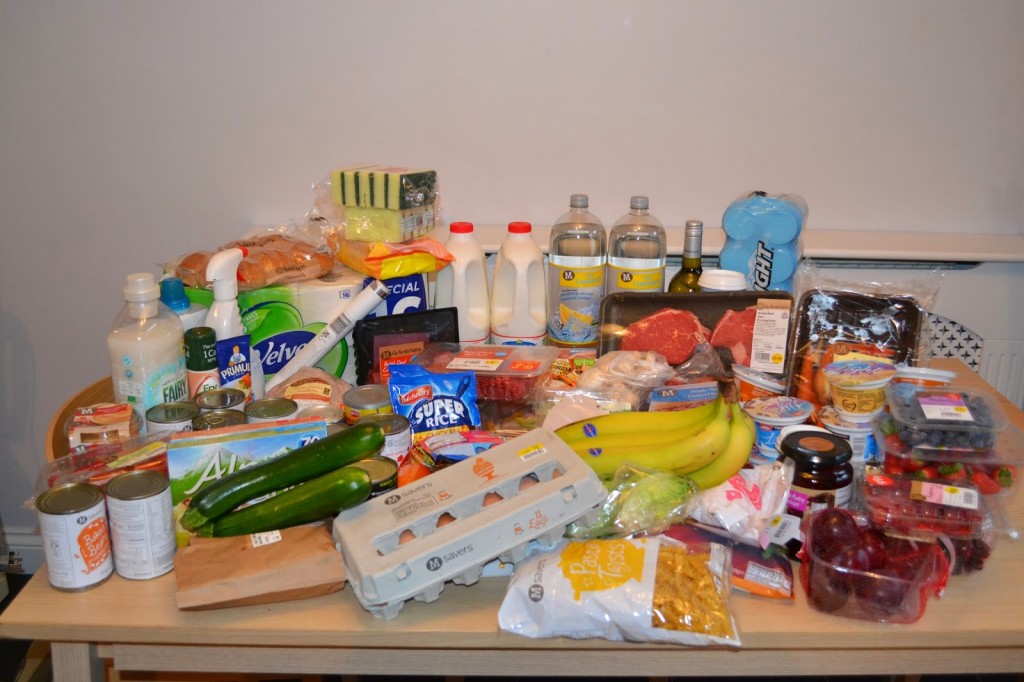 In total we bought 84 items of shopping. It didn’t include items such as nappies or baby food as I tend to buy them as and when rather than on a regular basis. 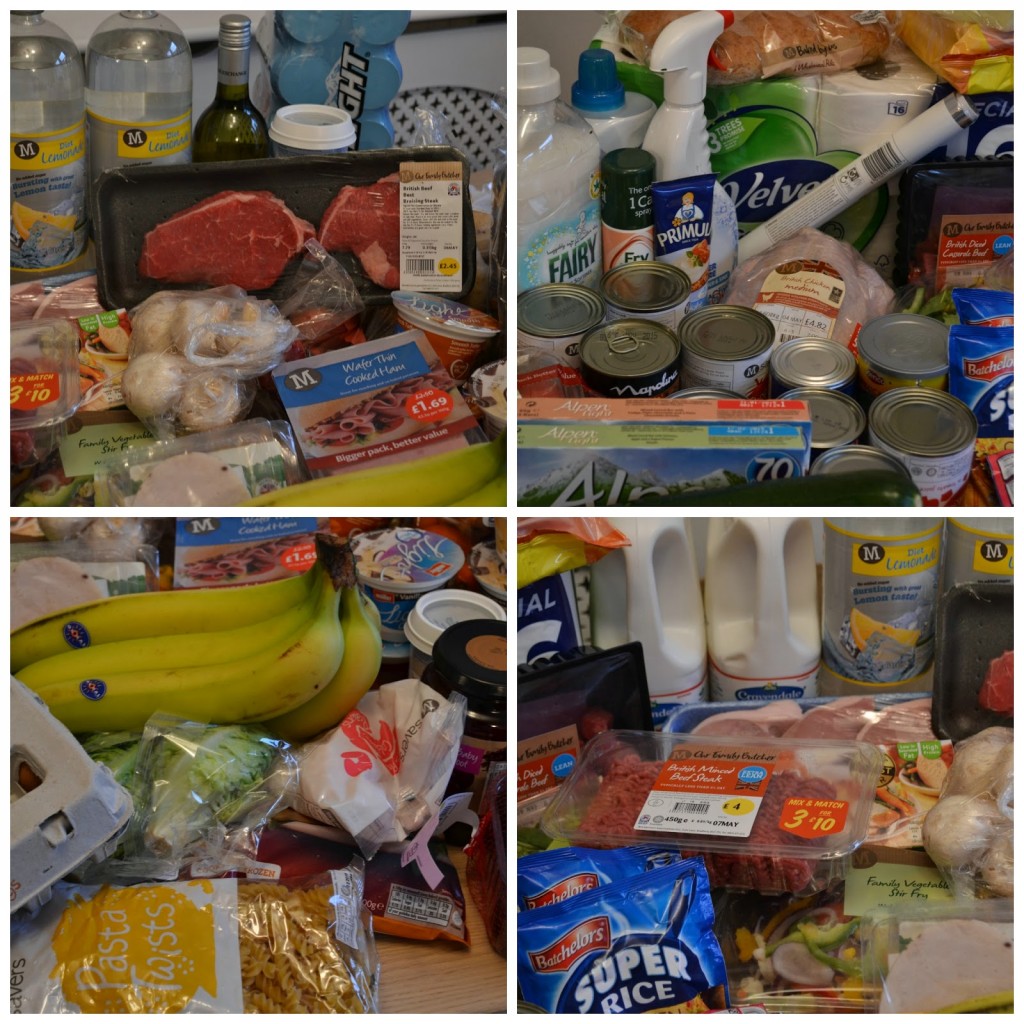 There was nothing particularly exotic or expensive in our shopping selection but the grand total was still £128.82! On a usual shop I spend £15-£20 on a massive amount of fresh fruit and veg from our local green grocers and then do an online shop for the rest of the shopping which tends to total £70 – £80. So looking roughly at those figures Morrisons actually worked out more expensive for us. 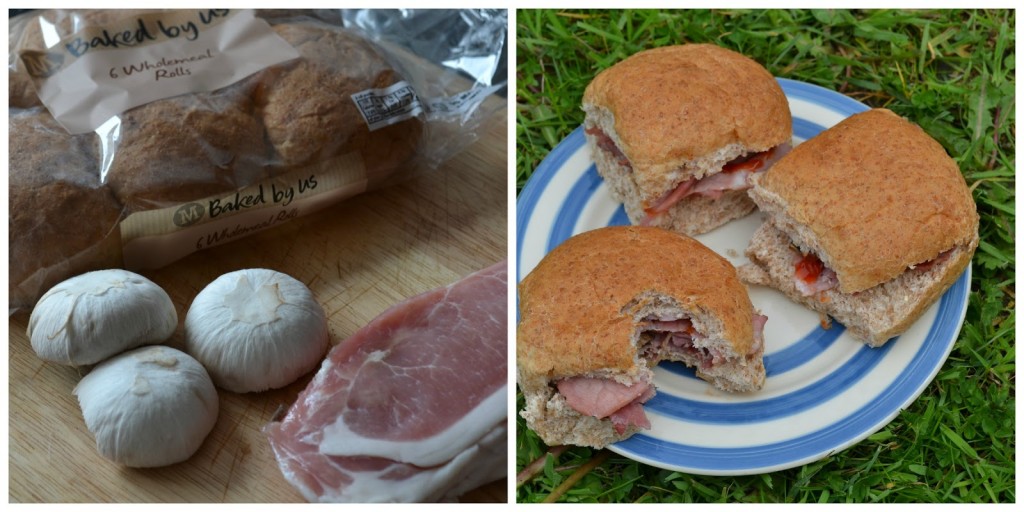 On the Bank Holiday Monday we started the day off with some delicious bacon and mushroom sandwiches.

Later in the day we decided to have a Bank Holiday BBQ. Hubby got cracking with some homemade burgers which for any Slimming World dieters were also syn free! 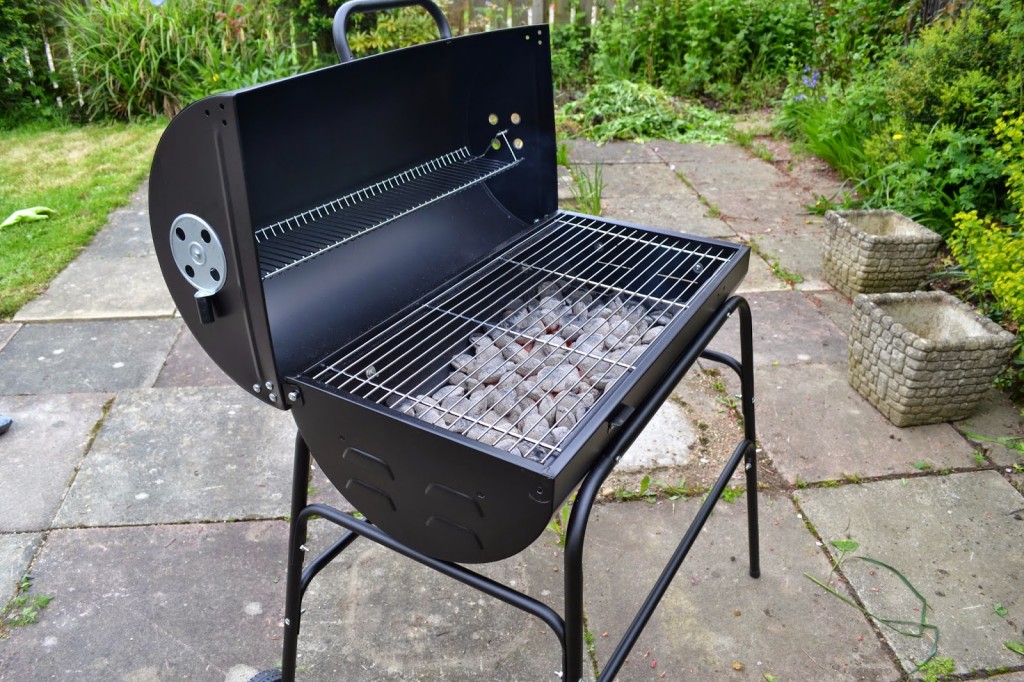 I even bought us a new BBQ from Argos which was half price, it looks good doesn’t it?!

We had a nice selection of meat for the BBQ. They were tasty and reasonably priced. The pork chops were particularly tasty. 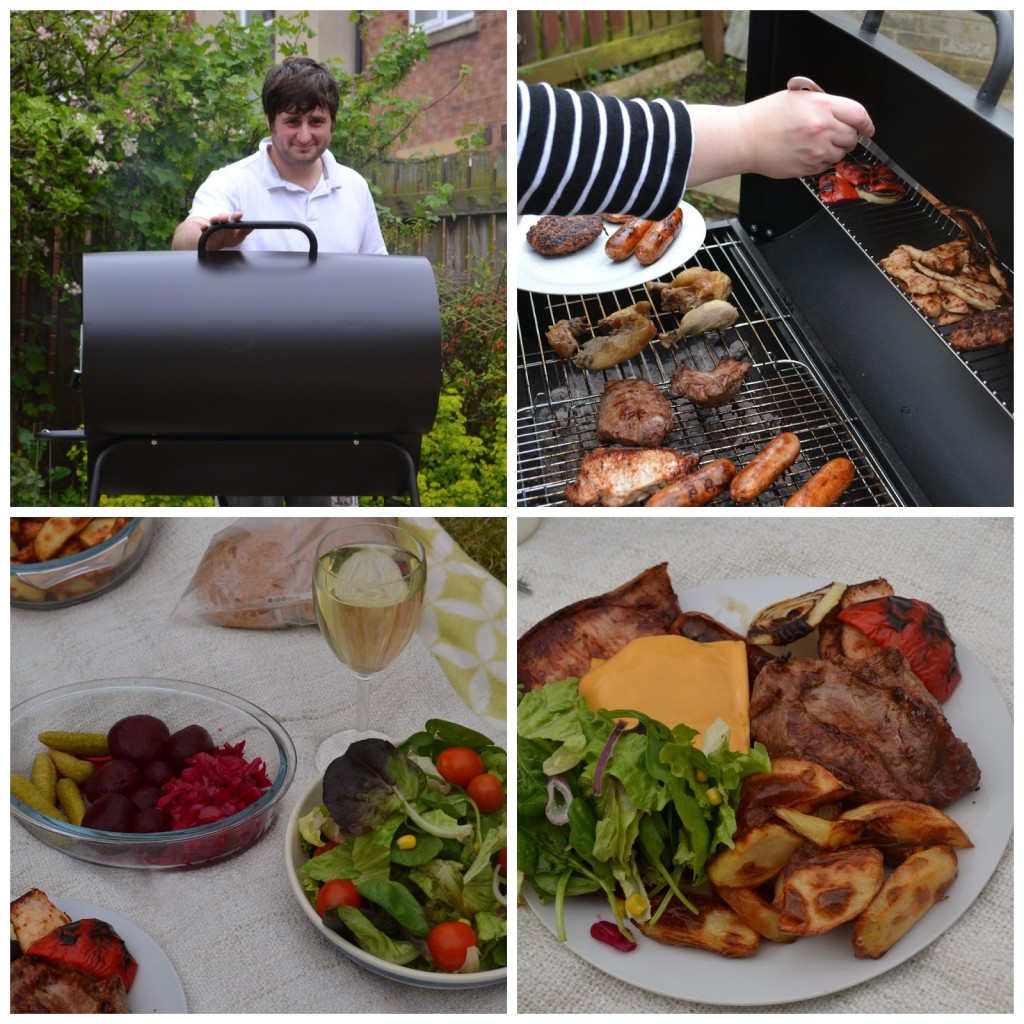 The salad I bought was fresh and tasty and actually lasted three days once it had been opened. 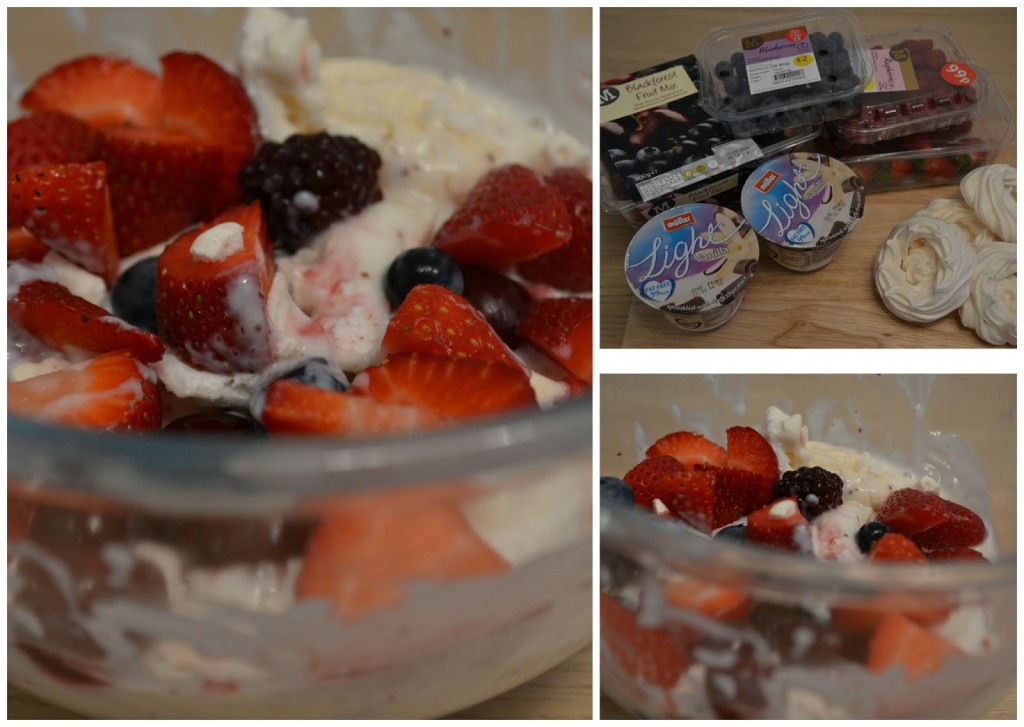 For our dessert I made a Slimming World friendly Eton Mess … sadly without the double cream.
Strawberries – 99p
Raspberries – 99p
Blueberries – £2.00
Blackforest frozen fruit – £2.00
Mullerlight yogurts – 10 for £3.00
Meringue nests – £1.59
I’m no Delia, so my recipes is my not means complicated, but it is delicious!
Simply crunch up three meringue nests, put in a bowl with a selection of chopped fruit. I found that the berries were a great choice. Then pour over a vanilla muller light yogurt, stir so everything is coated and voila! A very low syn (Slimming World Jargon for you none followers) Eton Mess. Perfect for the summer, and perfect for the hips. It tastes even better if you add a couple of scoops of vanilla ice cream to the mix too.
Total – £10.57
Cost per person roughly – £3.00 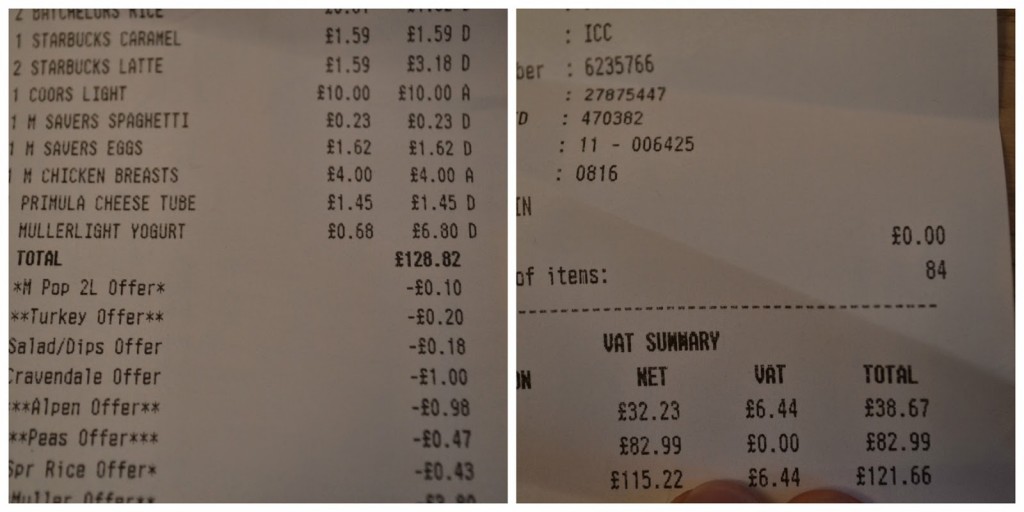 What did I think?
In all honestly, it was ….. Ok. I wasn’t blown away like I’d hoped to be.
I was rather disappointed by the available choices and large amount of empty shelves in my local store and the fact the  that the deli, meat and fish counter were all cleared and closed by 5.30pm on a Saturday night when the store doesn’t close until 9pm. Looking at other bloggers posts and pictures it’s clear the larger stores do contain a lot more choice and have some unique and exciting ways of storing and displaying items.
I was unable to get quite a few of our usual items and our shopping was quite a lot more expensive than normal, though some of that’s probably due to the fact I buy all of our fruit and veg from our local green grocers which is MASSIVELY cheaper than ANY supermarket I’ve ever shopped at.  Whilst some of the products were noticeably cheaper I did think others were higher, so in reality this evened out the shop total.
Whilst personally I’m not convinced Morrisons is any cheaper for our usual food shopping I had fun checking out their items and was impressed by how long the fruit and veg lasted and also that they stocked Garlic flavoured Fry Light!

*Disclaimer: Although I was compensated with vouchers for shopping at Morrisons, all opinions and experiences are my own*