Choosing a car is a tough decision, there are so many different factors to consider such as engine size, price and number of seats. We’ve been looking for a new one ourselves for the last couple of weeks but just couldn’t make a decision as to what we wanted.

We were sent the Peugeot 5008 Allure BlueHDi 120 A to try out for a week to see if matched our requirements.

The Peugeot 5008 is a family seven seater with masses of space, comfortable interior and a multitude of tech features. 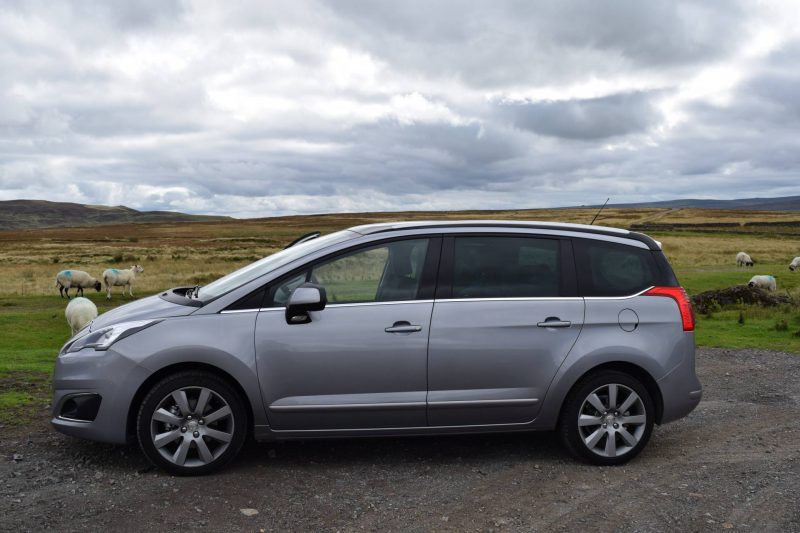 From the outside the car looks pretty compact and not at all van like as I’d expected. When it was delivered I initially thought they’d possibly brought me a different car to review, rather than the 7 seater promised. Once I opened up the car the space in size was easily evident. 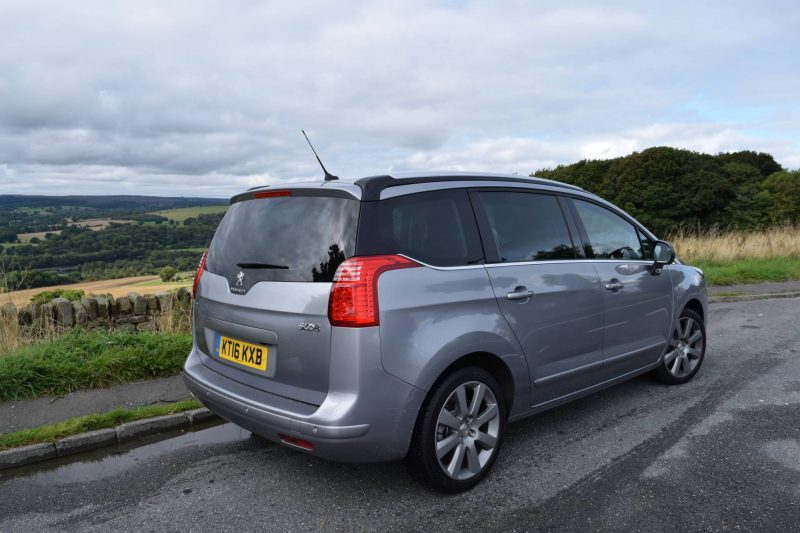 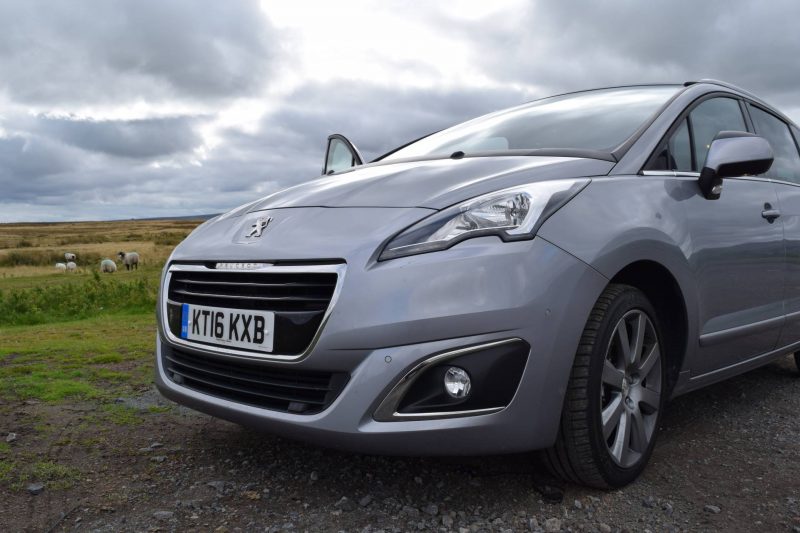 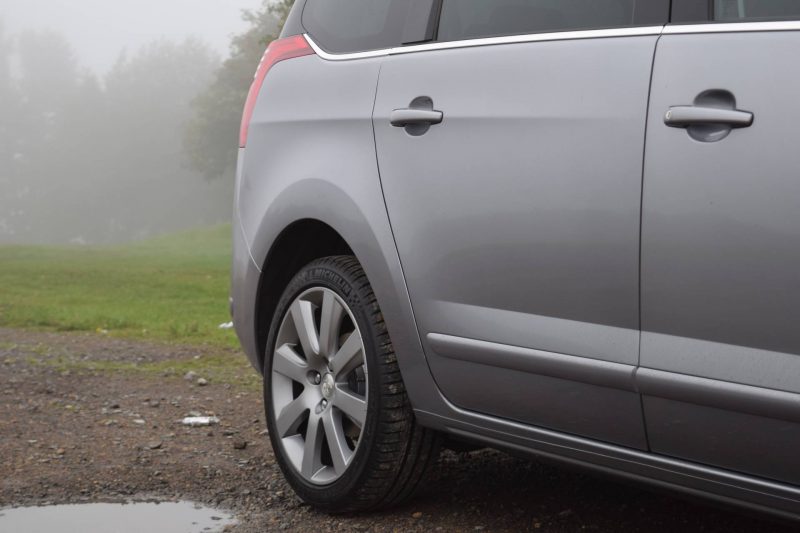 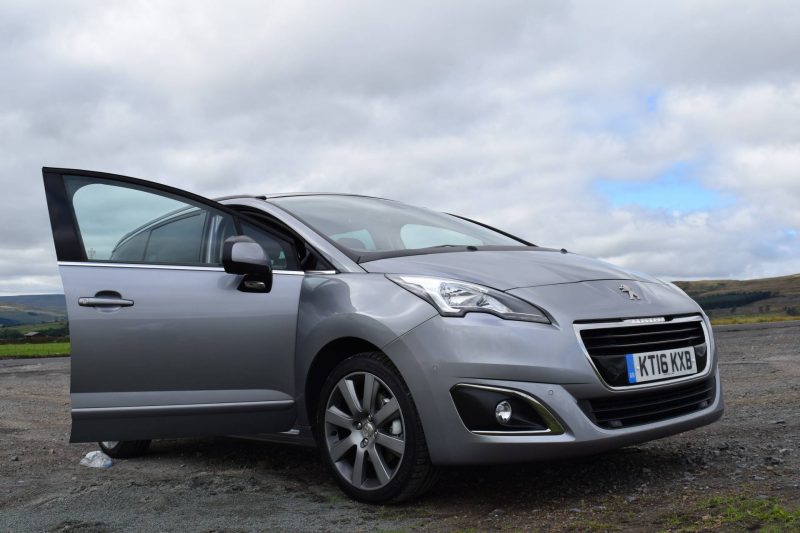 The car is packed with extra’s and it’s extremely comfortable, it has a simple but elegant interior trim and the buttons are all in convenient spots.

I loved the panoramic Cielo glass roof, it completely changes the feel of the inside of the car and makes it feel really brighty and airy when it’s open. It feels like having a convertible without the windswept hair. It’s great for sunny days as passengers can watch the clouds roll by above their heads.

It has handy front and rear parking sensors and camera which automatically start when you slip the gears into reverse. 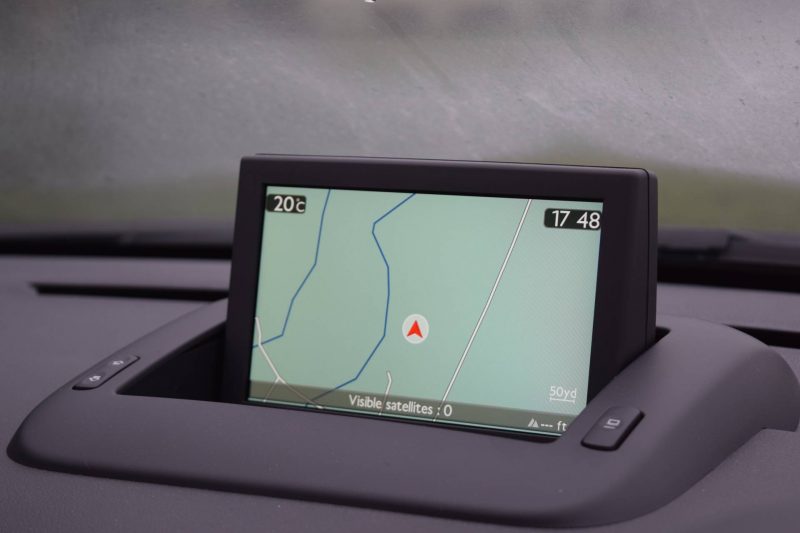 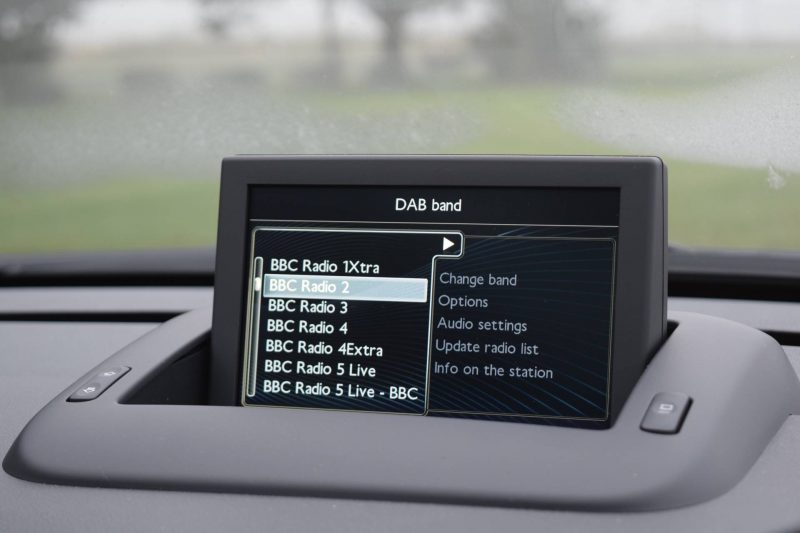 The car also has and inbuilt Sat Nav which is great in theory but unfortunately it seemed to hate our area as it really struggled to pick up satellites and continuously lost it’s signal.

I loved the built in rear window blinds which were really easy to use. They’re a god send when you have children that hate the sun on their face. 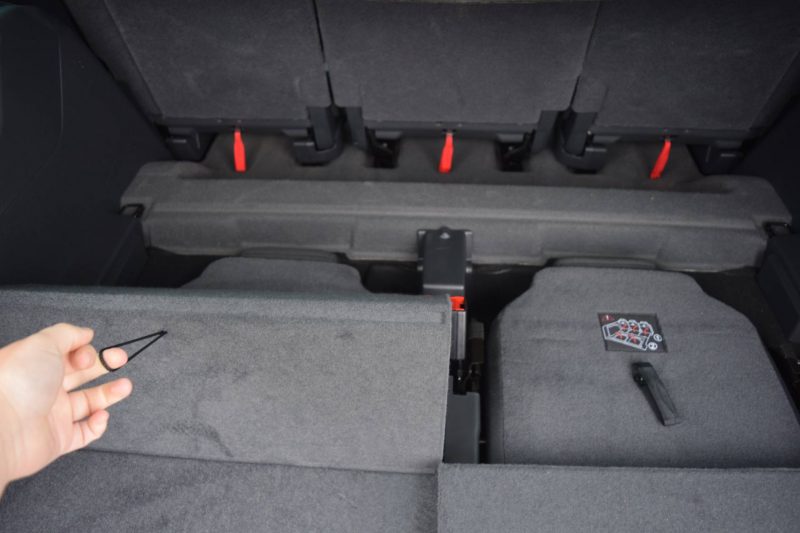 The space inside the car is pretty epic! The boot capacity is massive with the back two seats folded down and even bigger if you flatten the smaller seats at the back. I literally felt like I needed to go to IKEA just to buy huge things to bring home in the boot. The seats in the back can be changed to suit your needs. We didn’t need the smaller seats at the back but did take full advantage of the space in the boot. We were easily able to fit in a pushchair, balance bike and a food shop with space still remaining.

There also some great under floor storage in front of the back seats. It’s great for putting anything of value out of sight or hiding the 17 thousands diecast cars you’ve had to take on the journey. 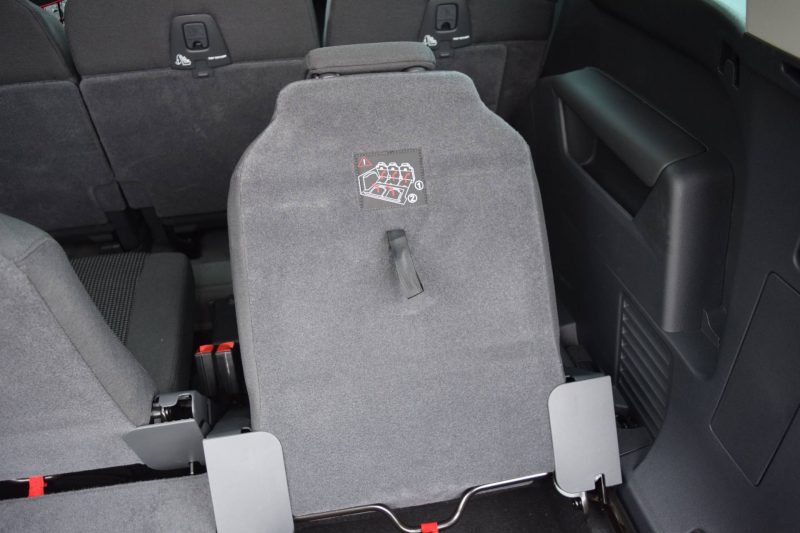 I really like the fact the rear seats have a pull down table in front of them, they’re ideal for colouring in or using to stack up snacks but I do wish they had a slight indent at least for drinks as things slide straight off at even the slightest bend.

My only gripe about the inside of the car is the distinct lack of cup holders, it’s a small whinge but there really is no where to put a drink safely in either the front of the back of the car.

The car has a NCAP 5* Safety Rating (the European Car Safety Rating which essentially measures how safe the car is if it was involved in a collision) and the ESP Standard and ASR improves the vehicle’s stability by detecting and reducing loss of traction/skidding. It detects a loss of steering control and automatically applies the brakes to help control the vehicle. The car has a whopping 6 airbags within it and there are Isofix points on three of the rear seats so it’s ideal if you have a family with younger children who are still reliant on car seats.

The built in Sat Nav is a nice little extra though we did find it a little temperamental as it struggled to pick up satellites. 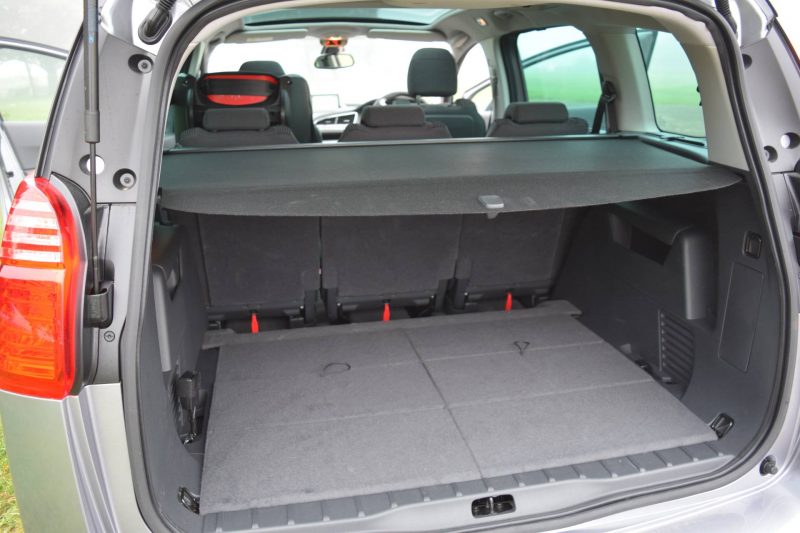 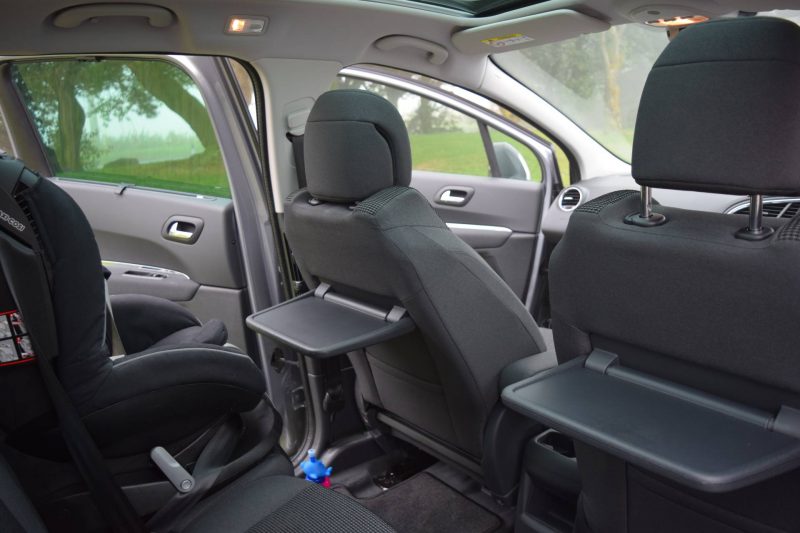 Initially I’ll admit I was a little bit disappointed that the car was an automatic Diesel but honestly, it’s by far the best automatic I’ve ever driven. Peugeot’s new generation of automatic gearboxes have been developed with Aisin AW and the quick shift technology, means much faster and smoother gear changes. Despite the engine being Diesel, the car was really smooth and quiet and I got used to the automatic gears very quickly 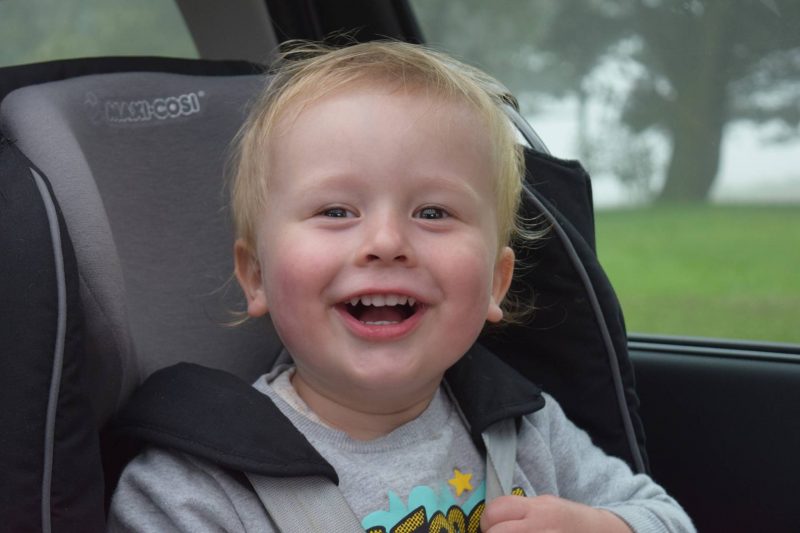 We absolutely loved the car and if we had at least one other child I seriously think we’d have paid a deposit of this rather than the Jeep Renegade that we decided on.

*I was sent the car with a full tank of petrol to review for a week. Opinions are my own.