I’m ashamed to say, until Friday we’d never actually visited Sage in Gateshead. However, we were kindly invited to visit Family Quest: Let the Beat go on! so we toddled along. 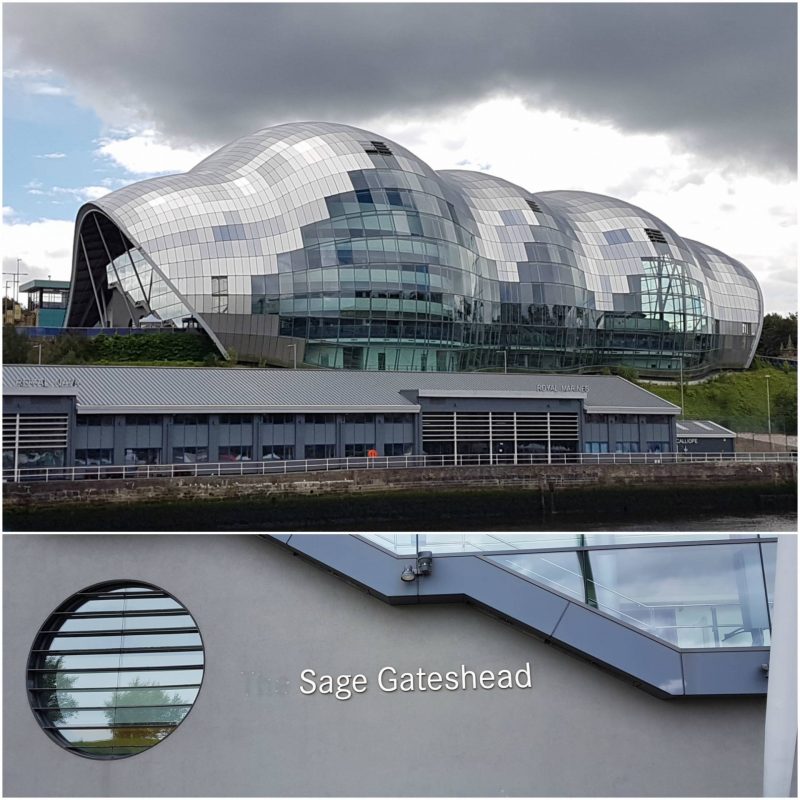 We took Nana along with us and arrived a little early so we grabbed a quick drink in the Sir Michael Straker Café while we waited for the show to start.

Created by award-winning theatre company, Unfolding Theatre, visual artist, Bethan Maddocks and co-director, Ruth Johnson, Family Quest – Let the Beat Go On! is not just a show. It’s a music making experience, sing song, crafting session, tour of the Sage and secret passageways and a fab way to get the whole family to interact with a fun and unique quest. 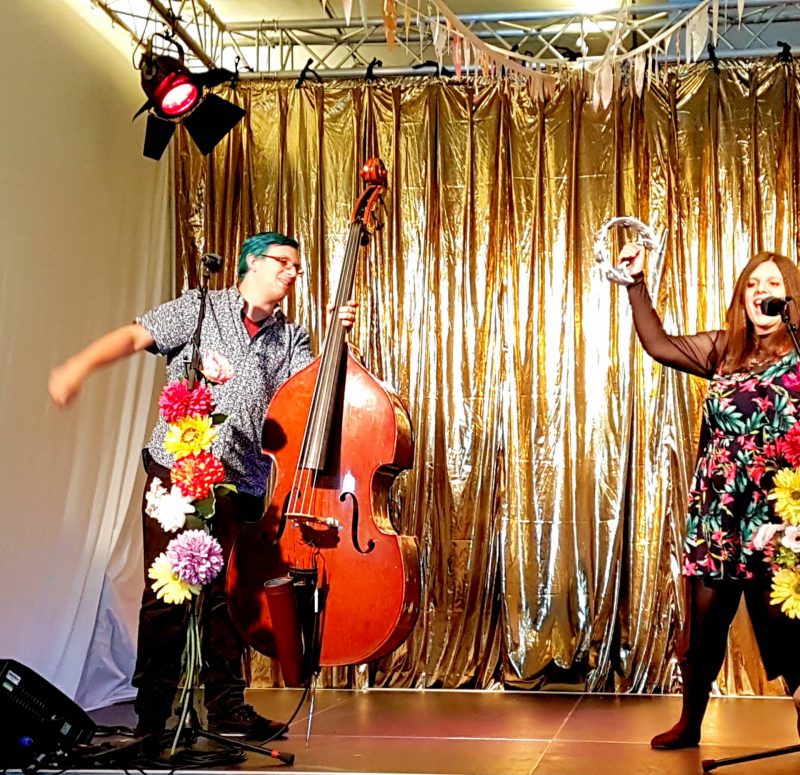 An evil force, aka The Silencer, has Sage Gateshead in its sights. This mysterious entity has turned down the volume, shut up the singing and unplugged the band. Music has left the building…We need your help to beat The Silencer.

Grab a map, solve mysteries and release sounds trapped around Sage Gateshead on a mission that leads to an unforgettable finale!

We met near the cafe and casually say around a small stage. To start off, we listened to two musicians play instruments and rally the crowd. However, it doesn’t last long.

The instruments stop working and the music comes to an end. It’s then explained than we were to work with the Society of Underground Noise Defenders (S.O.U.N.D) to take back the noise from the terrible Silencer. Our first task was to create music using every day items.

We played to the tune –

Who knew flapping a flip flop against a drain pipe would sound so good!? The little man took a short while to get involved but he really enjoyed shaking the plastic tub of rice and clapping his hands to the music. Child of all ages were able to join in as the activity was suitable for all. 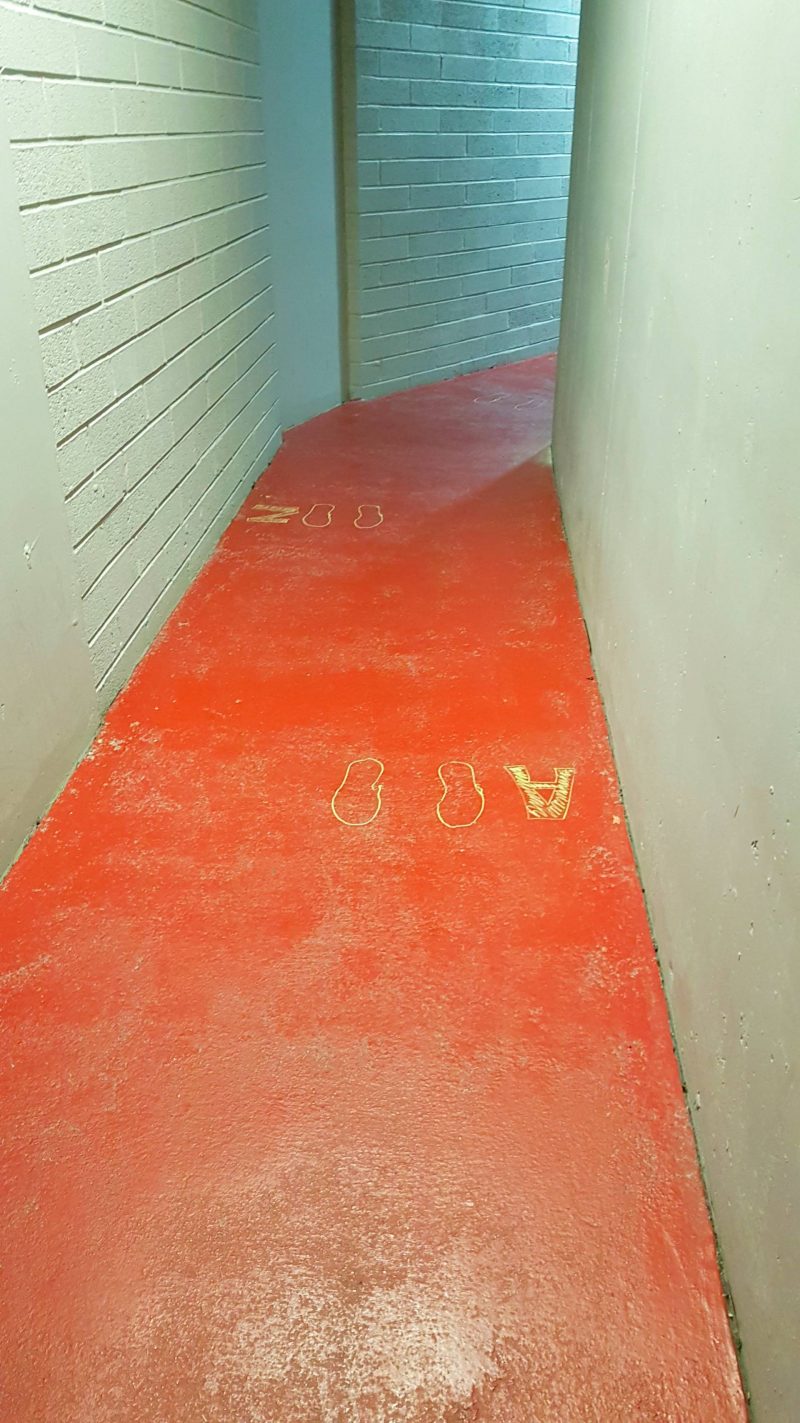 Once we’d completed this task, we then moved on to follow footprints( with letters next to them) down a corridor which activated noises above our heads. We were supposed to write down the letters which were next the footprints to spell out a password however, we got a little lost off as the little man insisted on moving up and down the corridor over numerous footprints.

We were taken round various parts of Sage and it felt like a bit of a secret treasure hunt as we sneaked through corridors and rooms. 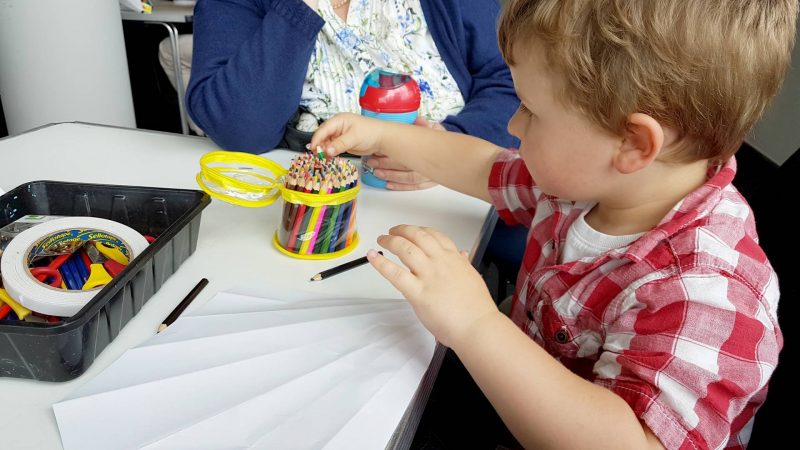 I think the little mans favourite task was making and decorating an ear trumpet. He loved colouring it in and adding extras too it. It found it’s way home too and now lives in the living room but has since become a megaphone! He also loved listening to the Violinist from above, the sound was so beautiful. 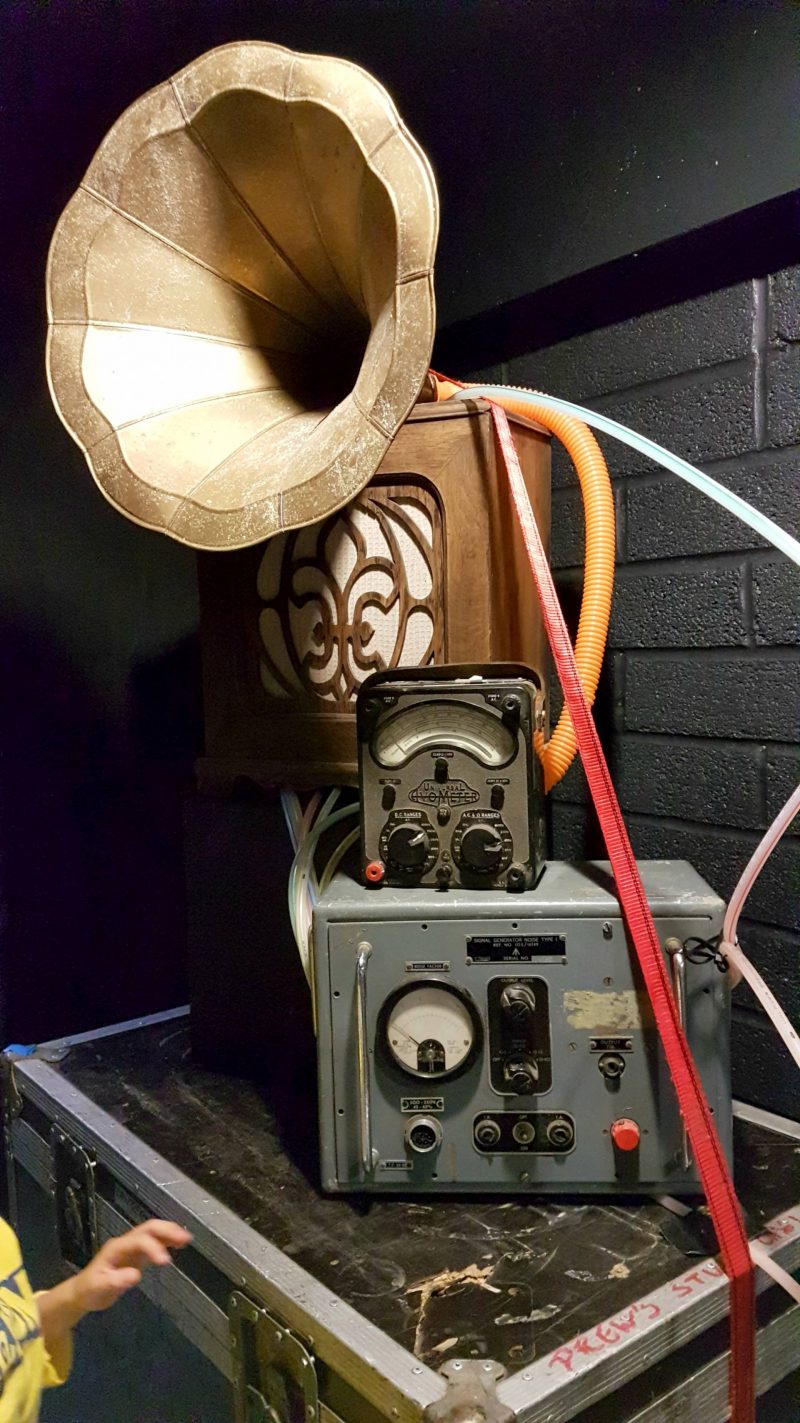 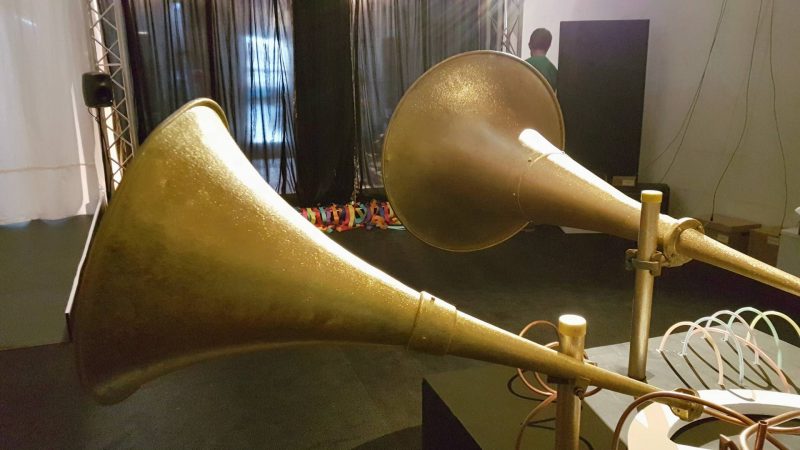 Towards the end of the quest we found ourselves in The Silencers Sound Library which was filled with boxes of stolen sound before finally hearing the the Silencer speak. She is finally persuaded to give back the sound and before a mini disco for the children ensued. They were again able to play musical instruments, dance and interact with others. They were also each given a S.O.U.N.D sticker which was a huge highlight for my little man. 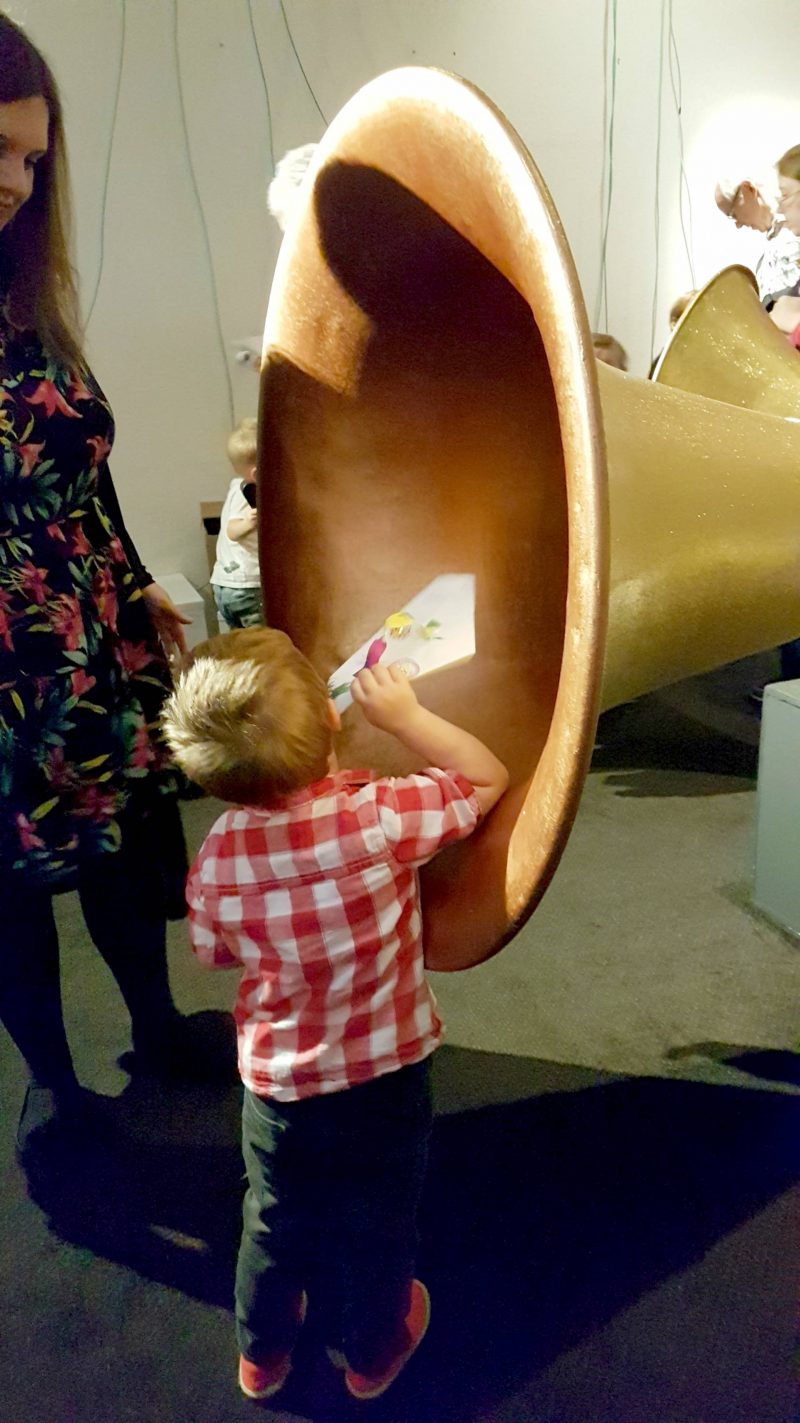 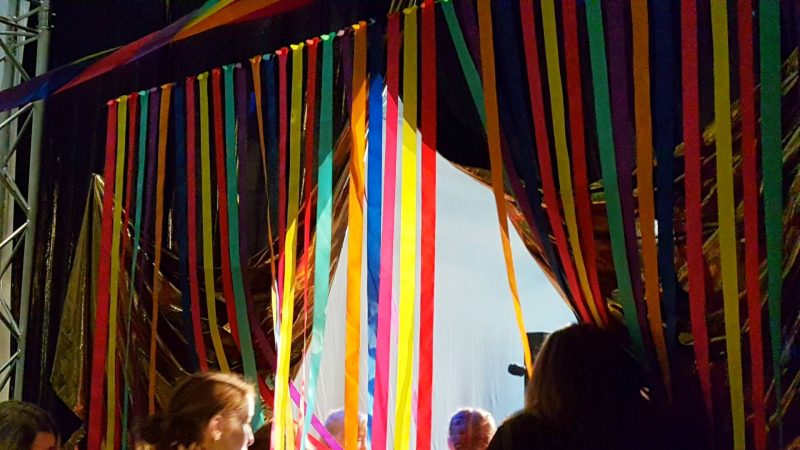 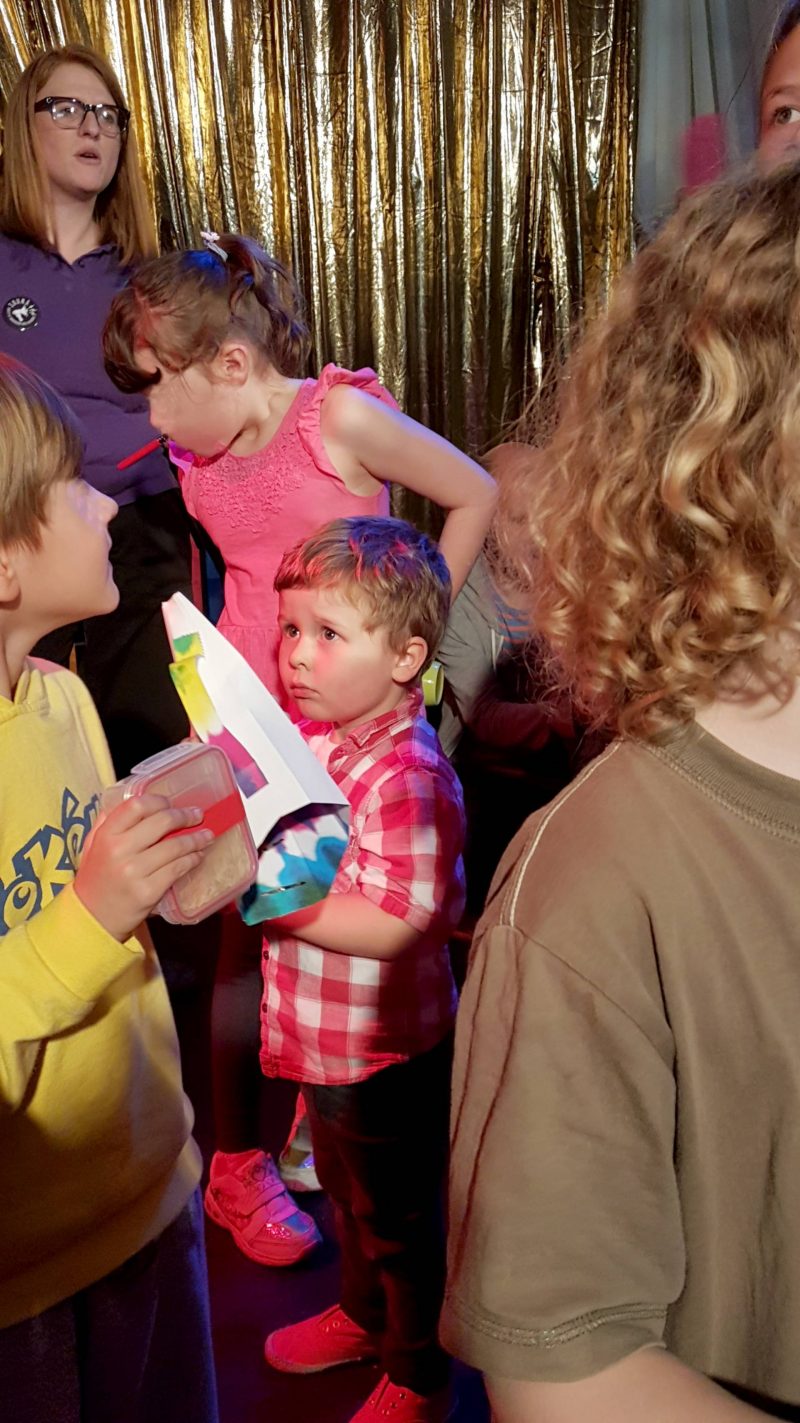 We had a lovely afternoon and thoroughly enjoyed ourselves. It made a change to the usual theatre shows and productions we go to see and felt much more interactive. 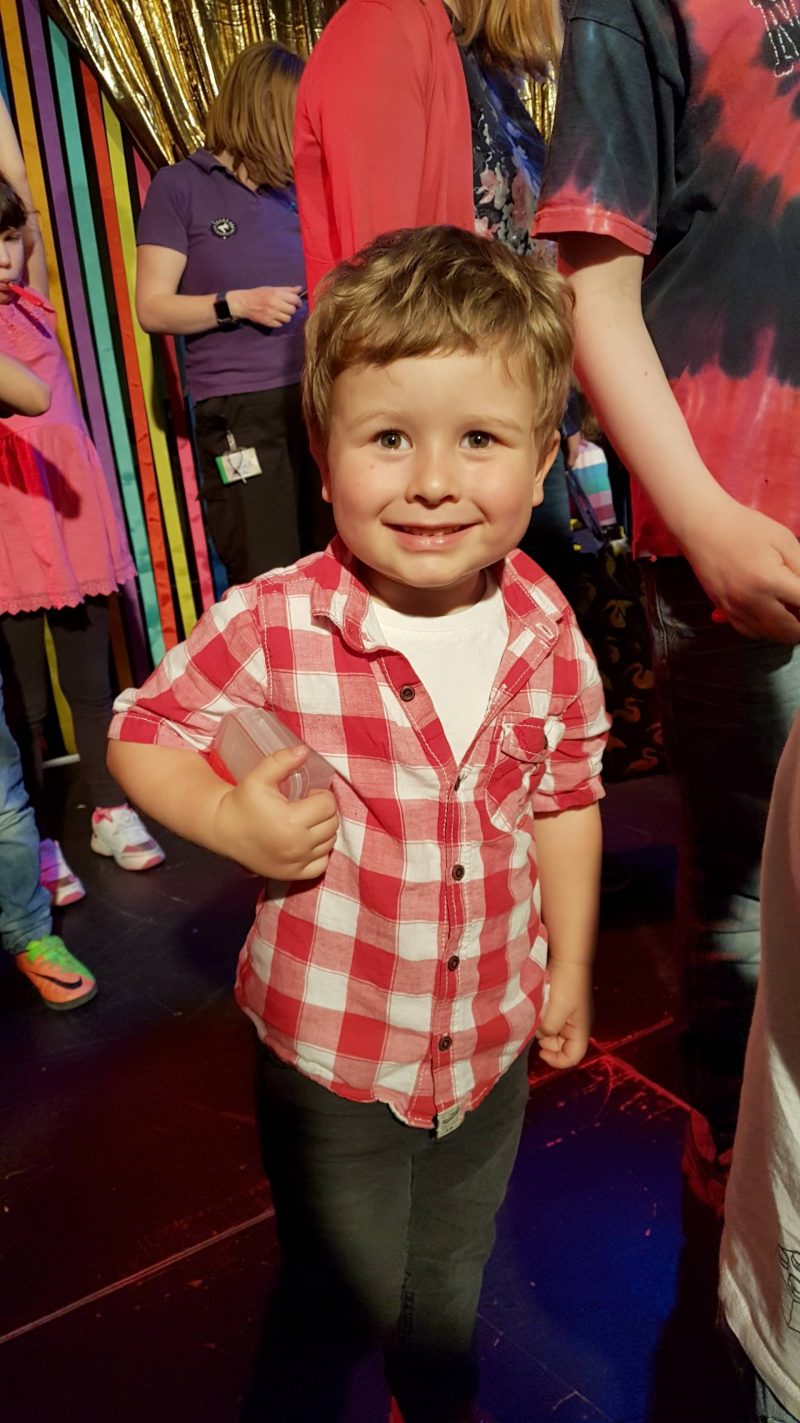 It’s worth bearing in mind that you’ll cover quite a bit of ground around the building and I think you need to be pretty mobile. There are lifts but I think wheelchairs and pushchairs would struggle to keep up with the group.

* Our tickets were complimentary in return for an honest review.