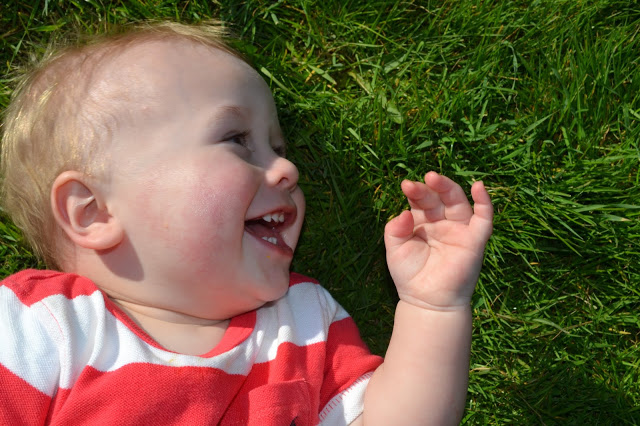 Personality
He’s such a little monkey. He’s always looking for trouble and mischief. I can’t take my eyes off him for a second otherwise something important is in the bin or the loo roll is shredded and all over the house.

He’s much more observant and pays attention to everything going on around him. He repeats sounds when we make them and tries to say words. He can say quite a few words now :- Da, Mama, Nan, Narna (banana), Hiya, Doy (dog), tacata (tractor) and dica (dicky bird or digger, depending on what he can see). He will also say ‘uh-oh’ if he drops something (or throws something).

He can point out his head, legs, tummy, mouth, nose and his willy when asked and can also poke out his tongue. He can also point out mine or his Dad’s nose and eyes too.

He’s obsessed with dogs, birds, tractors and anything else that has wheels. He’s the only child I know who can go to a show field filled with children’s rides and bright flashy lights and make a beeline for a caravan or car to admire the wheels!

He will stamp his feet if you ask him too and if you tell him to swim, he will lie on the floor and kick his legs and move his arms, it’s so cute.

He’s very much like me, poor child. He’s stubborn and hates being told no. He has a fabulous ‘pet lip’. 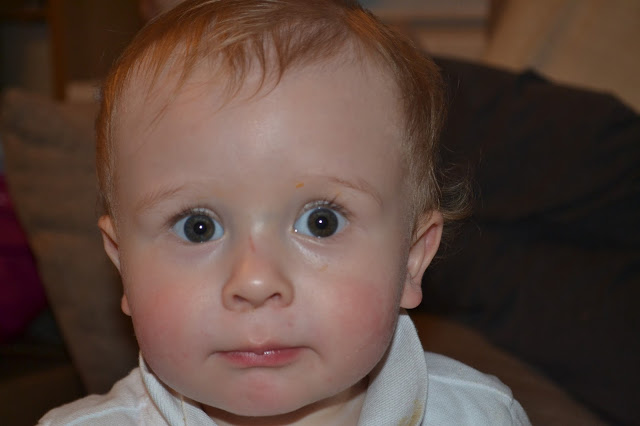 Health
He’s had a good month. He’s had the sniffles for a couple of days but it hasn’t developed into anything more. He’s still stuck at 8 teeth, 4 at the front at the bottom and 4 at the front at the top. I’m sure there must be more on their way though, because we have lots of dribbly days.

Clothes and shoe size
He wears 12-18 months in clothes and he’s in a size 3 shoe. I haven’t had him weighed for ages but I can tell he’s steadily gaining weight. People often comment that he’s tall, but I don’t really see it myself. I can’t imagine he’ll be too tall, Hubby is 5″8 and I’m 5″5! 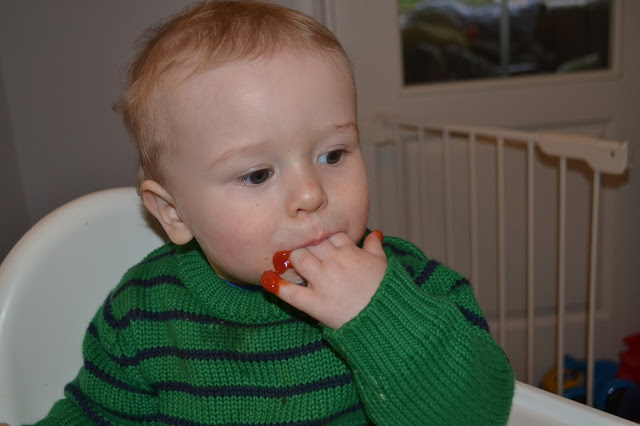 Eating
He still has two 9oz bottles each day, one when he wakes up before breakfast and once just before going to sleep. He’s perfectly happy with cows milk and I’m glad there was no issue with the transition from formula.

We have good and bad days with eating. Some days he’ll eat anything put in front of him and then others, won’t even give it a second look.

He still loves cucumber, and most sandwiches. He’s become a huge fan of tomato sauce and loves to dip ANYTHING in it. He will only eat at home if he feeds himself which often takes a long time.

Sleeping
Sleeping isn’t too bad. He usually sleeps through the night, but sometimes he does sneak in with hubby and I. I love him being cuddled up with us, and waking up seeing his happy little face saying ‘hiya’ over and over until we wake up. He settles around 8.30 to 9pm on a night and then sleeps through usually until 7.30 or 8am. 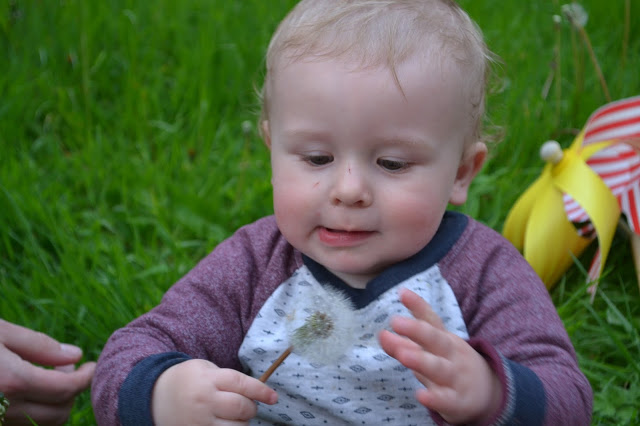 What we’ve done this month
We visited my Mam a lot in hospital where the little man was a hit with the nurses. He was good as gold and kept everyone entertained.

We’ve been swimming once a week which he absolutely loves. He has no fear of the water at all and just wants to be free to walk/swim by himself. He terrifies me!

We’ve had a few days out to Adventure Valley, soft play, swimming, and lots of walks to the park.

Likes
Cars, buses, tractors, actually pretty much anything with wheels. He gets so excited when they go past and does little shrieks. He loves playing with cars in the house too, and does super cute little ‘brummmmm’ noises as he does.

Putting seed on the bird table and filling the bird bath each night.

The park. He especially loves the slide and can get on to it and slide himself down.

Dancing. He loves a little wiggle when music comes on. He dances like his Dad!

Swimming. He adores being in the pool, though it’s debatable what he prefers, swimming of getting ready afterwards and opening and closing every single locker door.

Being outdoors. He loves being in the garden or the park. He’ll happily run round for ages, shouting and pointing at things. He loves playing football in the park too. Hubby is dead impressed with his football skills.

Dislikes
Having his nappy changed
Being told ‘no’
Coming indoors when he’s been playing outside.
Having his hands and face rubbed