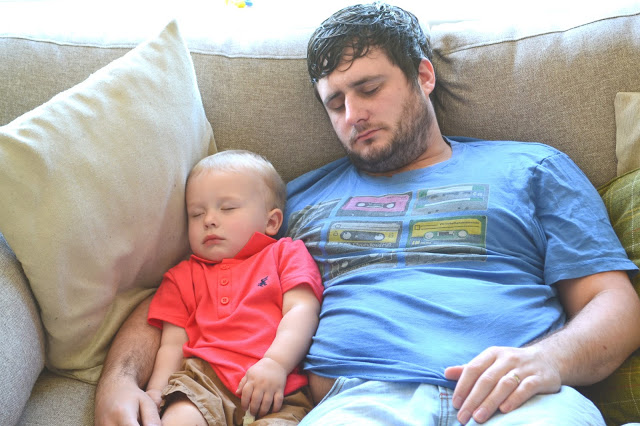 Personality
He’s stubborn and mischievous and hates being told ‘no. He’s into everything and never sits still for a minute. He never misses anything, and is always on the look out for for anything he shouldn’t have,

His new word is ‘dirty’. He says it when we put a dirty nappy in the bin and crinkles his nose up in disgust when he says it. I really need to catch it on camera as Hubby and I love it. He looks so funny.

He can point out various body parts on himself or me or his Daddy. He knows where his shoes and socks go and in a fashion will attempt to put them on himself. He tries to pull his trousers and nappy down at bath time and will wait impatiently for you to do it. 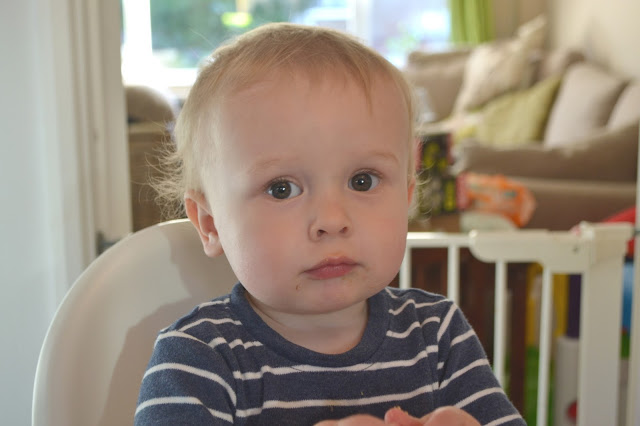 Health
He hasn’t been too bad, we’ve had one short bout of sickness and diarrhea which I think coincides with him starting to cut some back teeth. He had his first dentist appointment this month and the dentist was happy. He’s still only got 8 teeth (that I can see) but there are some about to break through at the sides. I can’t get my fingers to the back to check as he finds it extremely funny to clamp down with his razor sharp teeth.
His naps have reduced, some days he will refuse to have one completely. These are bad days! I get nothing done and he becomes the whingiest little monster by late afternoon.
He’s totally confident at both walking and running but will hold mine or Daddy’s hand if asked (sometimes). 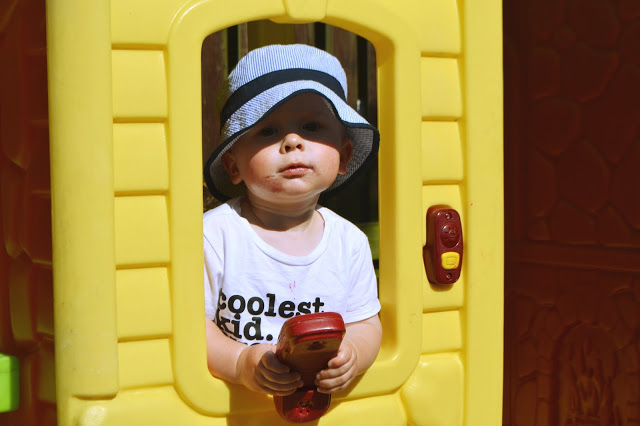 Clothes and shoe size
He’s still comfortable in 12-18 clothes but his vest are 18-24 because the smaller ones were starting to seem a bit short. He’s in size 4 in some shoes now too. We still haven’t had him weighed properly but my task this month is to take him to the baby clinic to be weighed, he won’t stand still long enough to get weighed on the ones we have in the house. 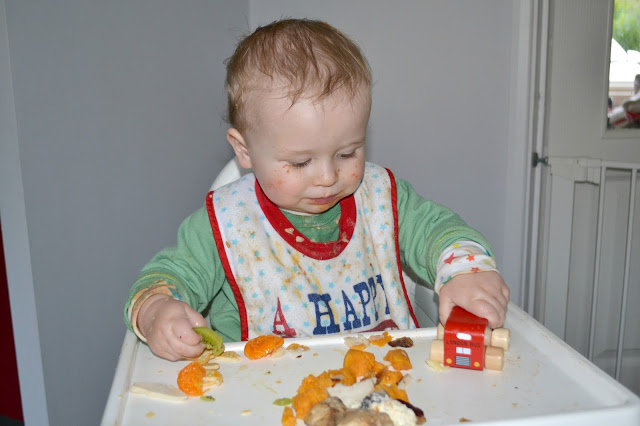 Eating
Eating has been a bit hit and miss. Some days he has very little to eat, others he will wolf it down and wait for seconds. He has two bottles of milk, one in the morning and one before bed. He seems happy with cows milk and when I remember I put Vitamin drops into his night time bottle.
He’s a huge of sausage and spaghetti and loves most cereal on a morning. 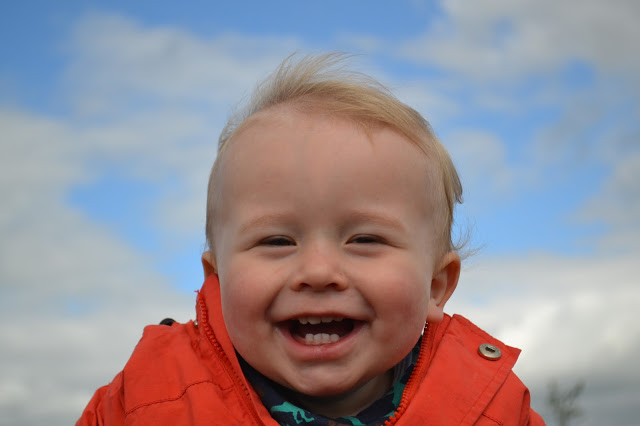 Sleeping
When he’s asleep he usually sleeps through and sleeps well. The getting him to sleep part is often the hard part. He usually goes to sleep drinking his bedtime bottle, otherwise I think he’d stay awake forever! He’s not a huge fan of going to sleep in his own bed and much prefers being snuggled in with Mammy and Daddy. 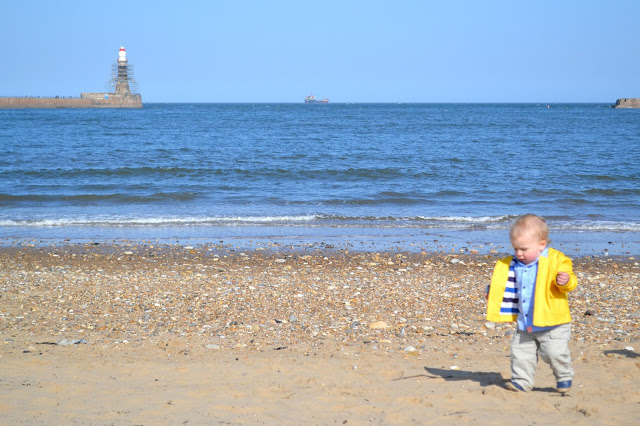 What we’ve done this month
We’ve had a windy visit to the beach, visited the Railway Museum at Shildon. we’ve been swimming, visited the soft play centre and been on lots of walks. We’ve visited a couple of summer festival/shows where he’s got to go on the smaller kids shows and really enjoyed himself. He’s really adventurous and has no fear whatsoever! We visited Creepy Crawlies near York to look at the animals and spent ages running round the soft play
Our garden is starting to look more like a garden so he’s spent quite a bit of time in their too, he’s got lots of garden toys but I think his Little Tikes house is his favourite.
Likes
He’s still obsessed with tractors and we’ve recently found the joys of ‘Little Red Tractor’ and ‘Tractor Tom’. He gets so excited when we put an episode on for him to watch.
He loves playing in the garden, particularly with anything that makes him messy, who new sand and water could be spread around the house so quickly and efficiently!
He loves watching out of our front window for cars, birds, animals and people whilst shouting merrily as they pass.
He’s got a little cleaning set with a brush and pan set, he’s started copying me and sweeping up the kitchen floor, it’s so cute to watch but I wish he could actually clean – that would make Mammy very happy! He likes to help put things in the bin, though I dread to think what’s been thrown out without my knowledge over the last few weeks.

He still loves to go swimming and we try to take him at least once a week, his confidence in the water scares me a little, he has no fear at all!

He loves playing with his little toy kitchen and cars and will happily sit on the living room floor pushing them round and making appropriate noises. 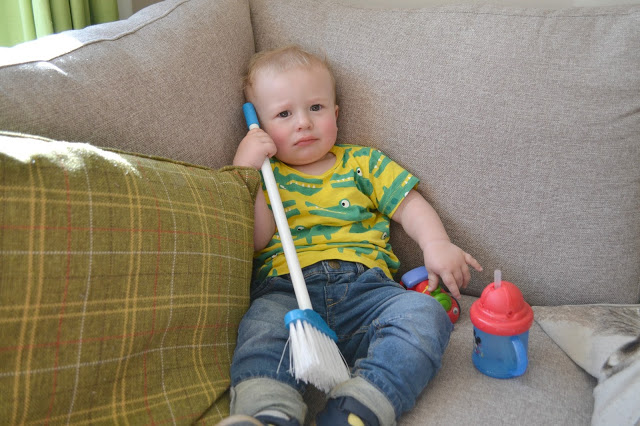 Nappy changes are still the worst thing in the entire world! He hates it, especially if I try and do it anywhere other than his changing table upstairs.

He doesn’t like having his hands and face washed, particularly if I dare to use a wipe. He loved bath time and will tolerate it then, but if it’s not bath time I have no chance!

Being told ‘no’, He’s stroppy and has started hitting, throwing or knocking his drink over on purpose if he’s told no. I feel the terrible twos are starting early!