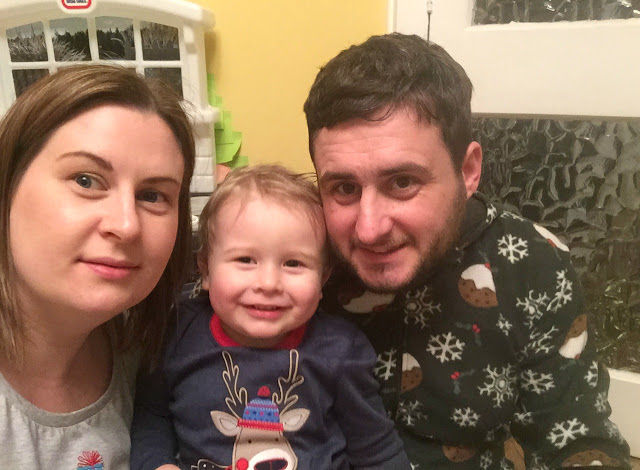 Our Christmas was lovely this year. It was peaceful and relaxing, which was nice after a manic few weeks beforehand. I had a rare year off work and it was great being able to spend time with the little man, who understood his second Christmas a little bit more.

We put our Pjs on early (all nice new Christmas ones) and while I prepared veg for Christmas Day, hubby and the little man watched Christmas films and played with toys.

Once the veg and Turkey were ready we made a Christmas train from Lego, ate sweets and drank hot chocolate. The little man ended up falling asleep with us on the sofa. 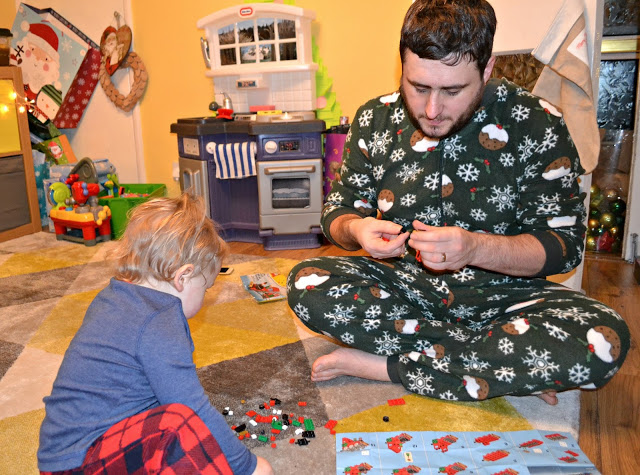 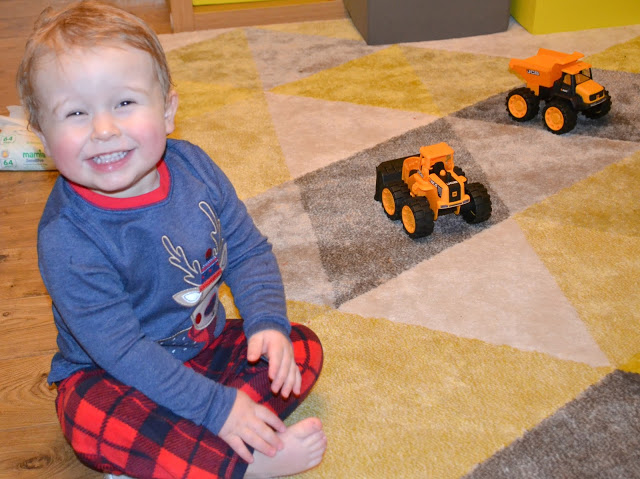 Once he was safely tucked up in bed, Santa came! We moved all of the little mans presents downstairs from their hiding place in the spare room. Then we realised we were going to need an extension to house all of his new things! Eeek. 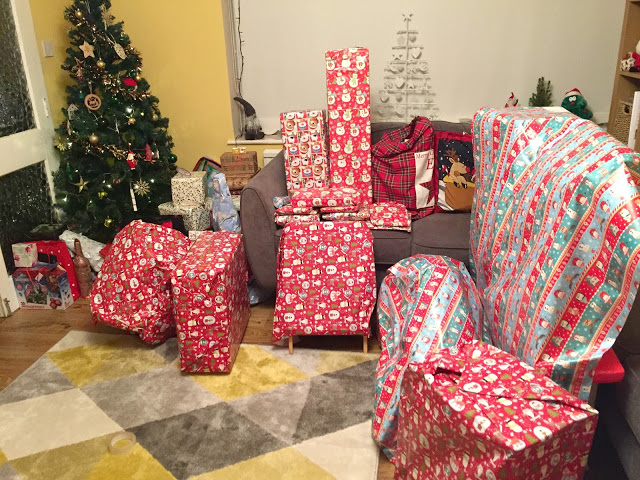 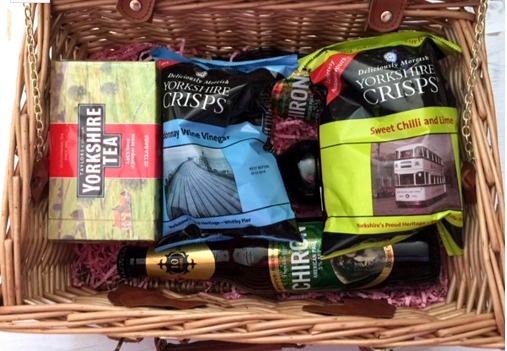 Hubby and I finally got to sit down to scoff some of the lovely things in our Christmas Eve hamper that was kindly sent by PlusNet for their #LovesYouBack campaign. It was a tasty treat and finished us off for the night. 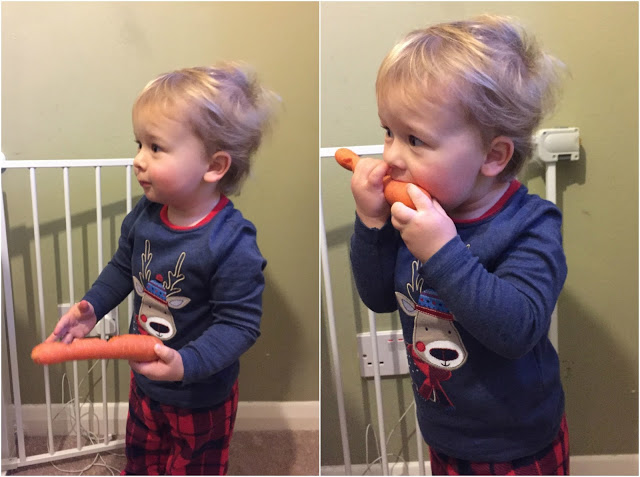 A rather excited but lazy little monster finally got up at 8.10am and discovered that Rudolph had eaten the carrot he’d left out. Obviously he had to have a bite too!

The little man was thoroughly spoilt. I was lucky enough to win a few things over the year for him and he got lots of lovely things from his Nana. His presents kept arriving and we were still opening presents from people up until New Year! 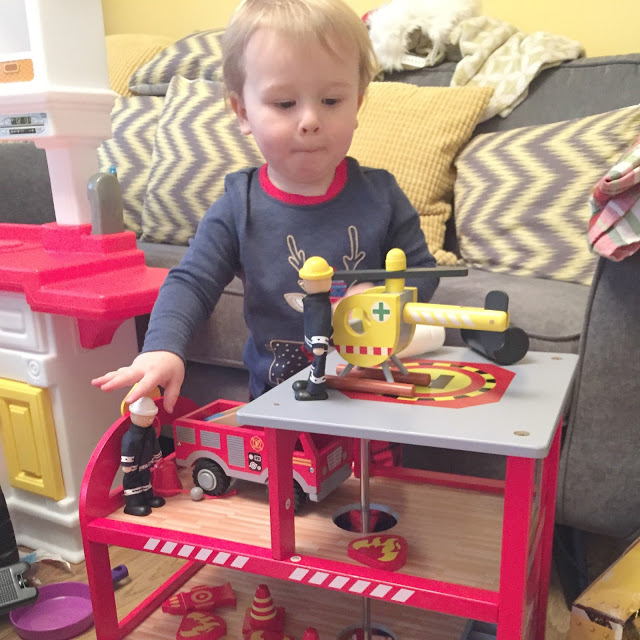 He opened most of his presents with Daddy and me (4 long hours of wrapping paper piles and empty boxes) and then opened more when his Nana and her partner arrived at ours around midday. 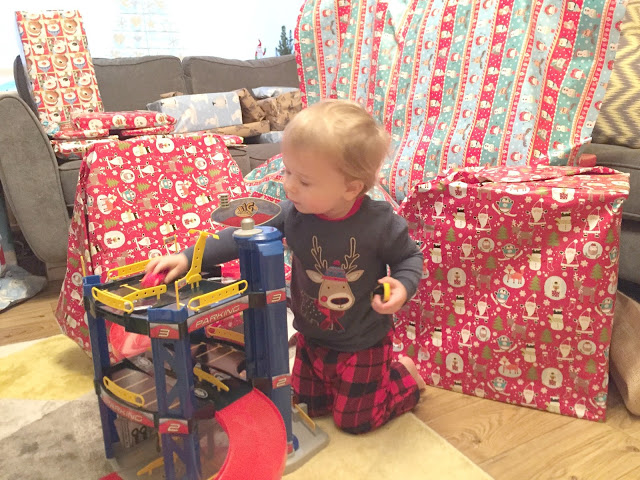 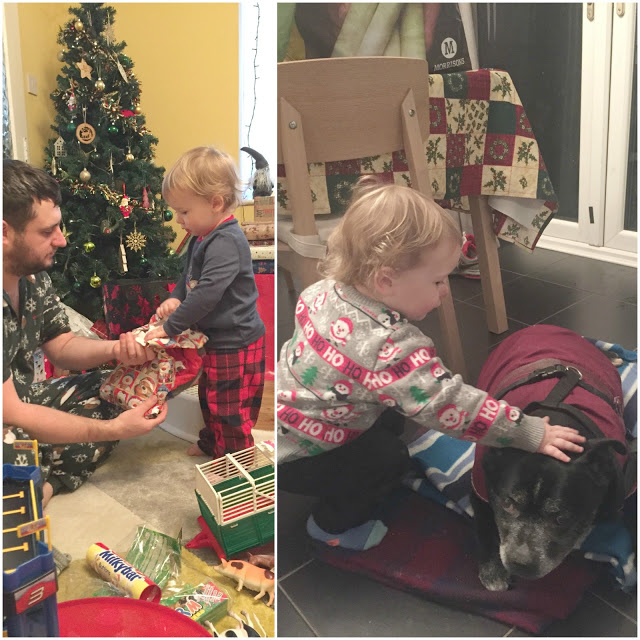 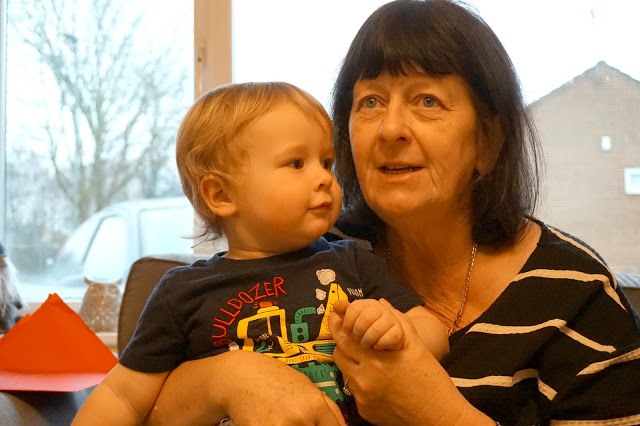 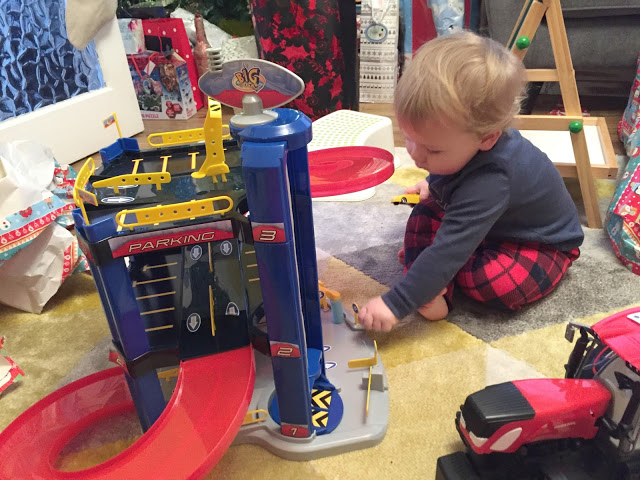 He loves this car garage with super fast ramp. It only cost me about £5 in the Christmas sales last year but it was clearly a good buy. 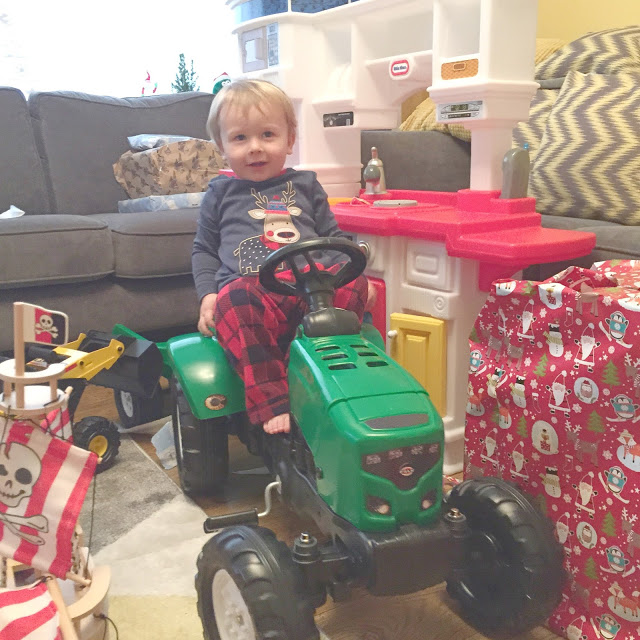 I think his favourite Christmas present was from his nana – a huge green ride on tractor and trailer. He didn’t want to get off it on Christmas day and somehow he’s managed to keep it in the house. I might have no living room floor but he’s happy. It’s also apparently the best place to watch the tv from! 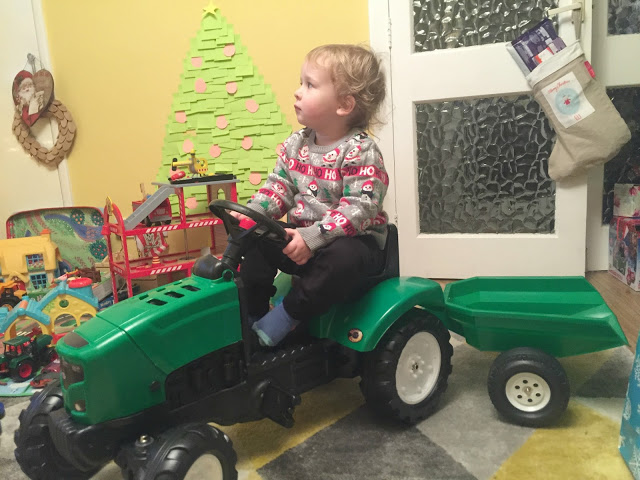 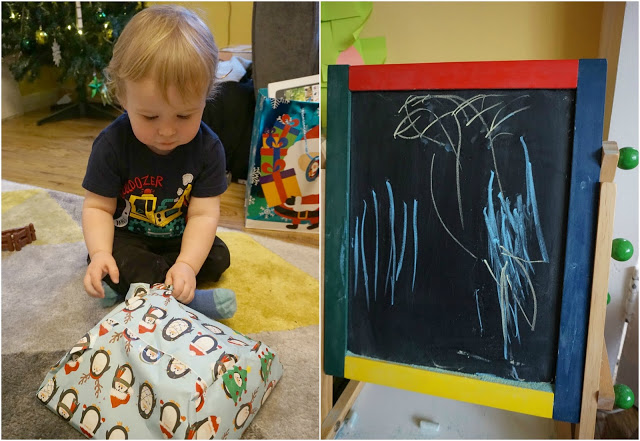 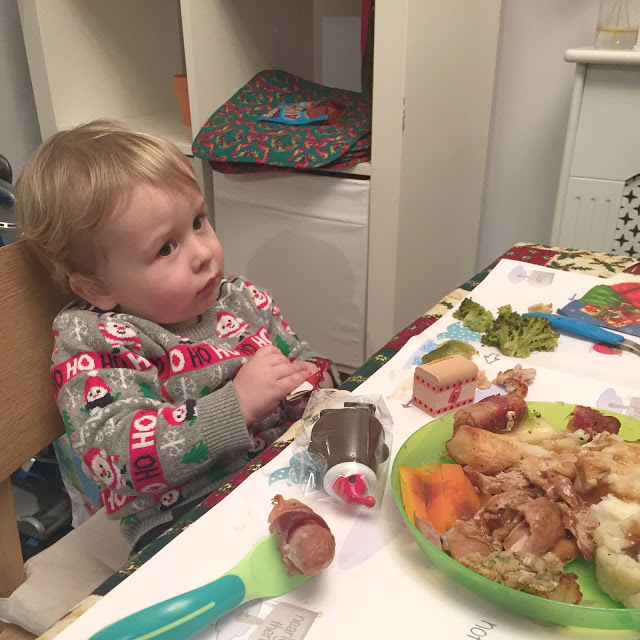 Despite his miserable chops, he actually liked his Christmas dinner but didn’t eat very much. He was tired and still quite excited. He ended up eating it later in the day and then more on Boxing day as bubble and squeak. He sat like a big boy at the table rather than in his highchair and pulled crackers and and worth a hat. 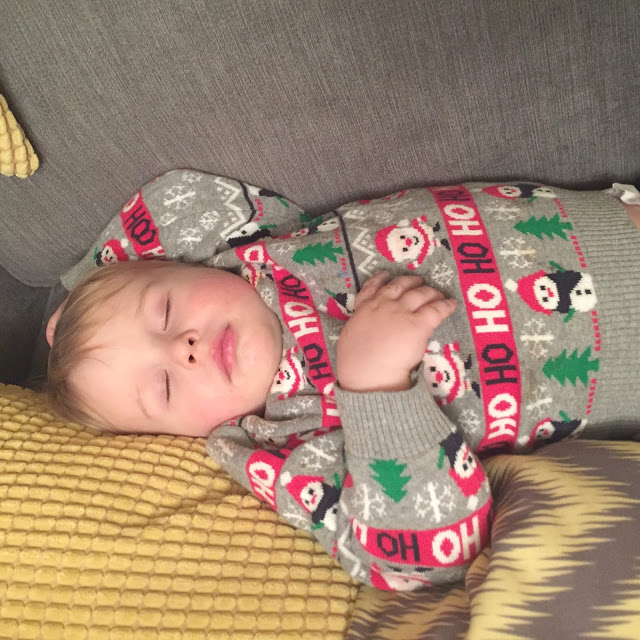 After lunch the little man fell a sleep on the settee. He’d complete worn himself out running round like a lunatic all day.While he slept, the rest of us sat and relaxed and stuffed ourselves with festive Chocolates and drinks. 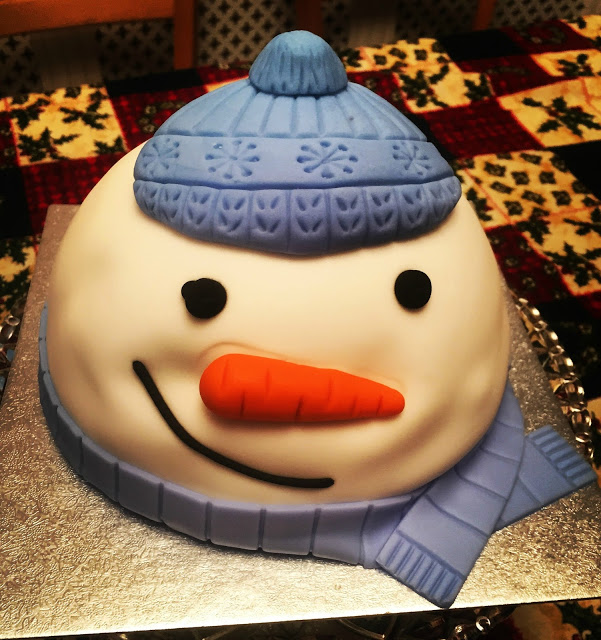 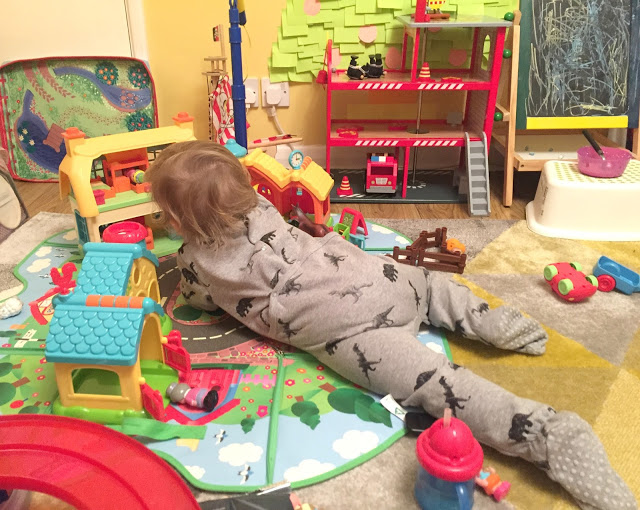 Christmas night was spent cuddled up on the sofa watching Inside Out and playing with toys. The little man ended up staying up until 10pm, but did have a nice lie in on Boxing Day. 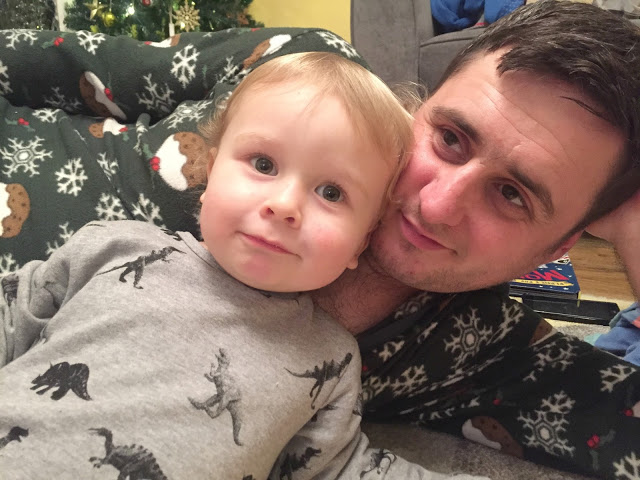 Christmas was nice this year. We got to spend it with the people that matter and the little man had a fantastic day!