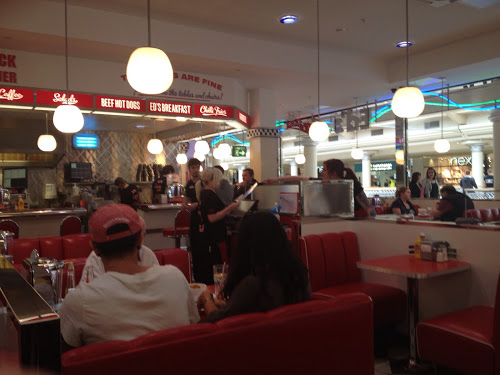 After recently seeing this had opened in the Metro Centre we decided to call in for lunch. Until I did a little Google search I wasn’t aware this was a chain, with branches throughout the UK as well as an international restaurant in South Africa  (I’d have thought there’d have been at least one in America).
It saddens me but I’m always attracted to anything gimicky, so as soon as I saw this was a themed restaurant, I was straight there. 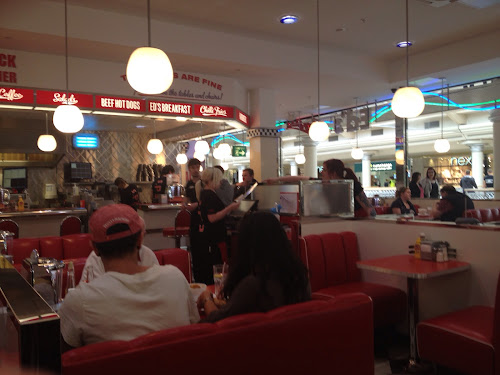 It was reasonably quite when we arrived and we didn’t have to wait more than a minute or so for a table, the staff were friendly, polite and helpful, albeit a little ‘for show’.
The restaurant looks great with it’s shiny red formica tables and checkered floor tiles. It looks the business. With a small juke box on each table, it’s a 50’s music lovers dream. 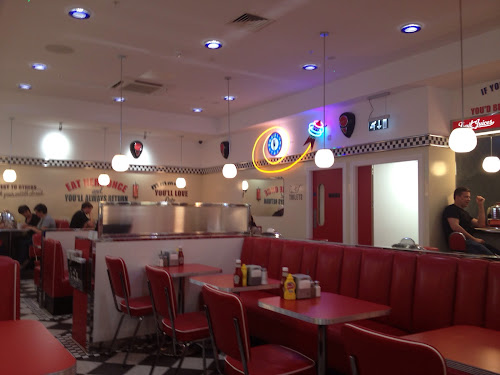 So … the food.
It was ok. That’s as exciteable as I’m going to get over the food. To be honest I was pretty disappointed.
We chose –
CHEESE OR CHEESE £6.45
ATOMIC AMERICAN FRIES £4.65
DELUXE BBQ DOG – £6.95
BACON AND CHEESE FRIES £4.50
They first thing the staff tell you when you’re about to order is that the burgers aren’t served with anything. For £6.45 I think that’s pretty bad. The burgers come on a side plate with a tiny amount of filling (in my case, one slice of lettuce, one slice of tomato, two small pieces of pickle, one cheese slice and a tiny dollop of mayonnaise and mild American mustard. It was edible, but pretty dry and lacking in flavour.
The Atomic American Fries were tasty, but £4.65 for some frozen chips and little pots of dipping sauce is quite expensive.
They food was the let down for us, although it was by no means awful, it was simply average. It lacked in flavour, presentation and value for money.
On a more positive note, their milkshakes are pretty tasty – we both ordered one to take out at the end of the meal and they were lovely (The Nutella one is to die for). 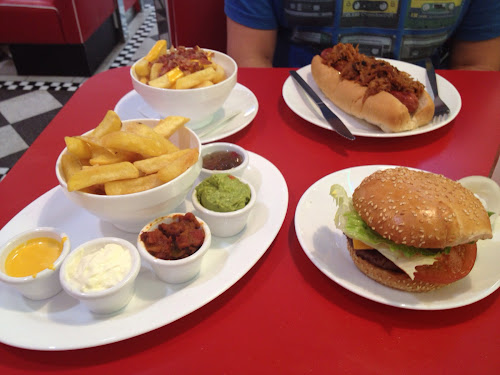 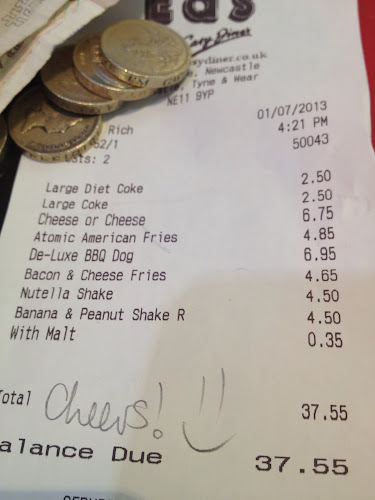 On their website there is an option to sign up for their membership club, where for every £1 you spend you’ll earn 10p credit on your loyalty card, which can be redeemed during a future visit, there are also weekly offers listed and some of their branches offer student discount, though not the Metro Centre.
Personally, I wouldn’t return, I’d pop in for a milkshake to drink on my way home from the Metro but wouldn’t eat there again.
There are much tastier, cheaper and places with a more exciting menu in the Metro Centre than Ed’s Easy Diner.