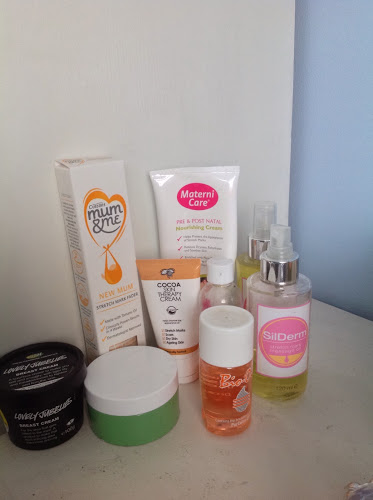 I appear to have become obsessed with stretchmark creams and oils and have managed to collect my own little selection during my pregnancy.

From the early days of my pregnancy I started to use creams and oils on my expanding tummy, in the hope it would keep stretchmarks at bay. I used it once a day, on an evening. I’ve now hit my 30th week of pregnancy so I’ve started using it both on a morning and before bed. So far. So far, I’m stretchmark free … will it last? Who knows, but for know it appears to be working.

I thought I’d share some of my finds and purchases with you. 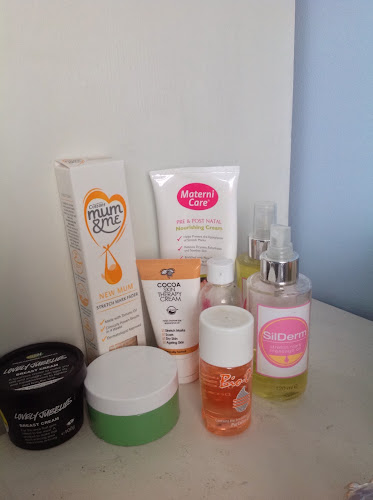 Silderm Prevention Oil was a product I’d read a bit about online. It’s by no means a cheap product, costing £34.95 for a 120ml bottle. It even looks posh in it’s glass bottle. It’s a smoothing oil, which is quickly and easily absorbed into your tummy. It also has a relaxing, lavender scent which I suppose may help you sleep on an evening.
Maternicare cream was one of the first products I tried. It costs £14.99 for a 200ml tube and is stocked in Boots. It’s a thickish white cream, which is absolutely freezing unless you warm it in your hands prior to application. The cream feels very moisturising and again, soaks in quite quickly, maybe slightly less quick than the oils.
I bought Cussons Mum & Me Stretch Mark Fader yesterday from Boots. It was on special offer, with a third off, and I also had a coupon from my Bounty pack for an extra 40p off. The product is more of a serum, than an oil or cream. It usually costs £9.99 for a 70ml tube. It contains Lupin Seed extract, Pomegranate and Tamanu oils and smells delicious. I’ve only used this twice so far, and do find that you need to use a lot, to get a reasonable amount on your skin, so I think this would work out quite expensive to use daily.
Cussons Mum & Me stretchmark cream was bought after I tried a sample in one of my Bounty packs. I thought it smelled quite nice and had a good consistency. Whilst I like the scent, it’s probably the product I use the least. It usually costs £9.99 for a 125ml pot in Boots but is on a third off at the moment, so is only £6.66.
Bio Oil is a product I’ve used previously, and so has my hubby. He ended up with a nasty scar on the middle of his forehead and used this daily for a few months, and it made a dramatic difference. His scar is barely noticeable now. I like Bio Oil, it smells nice without being overpowering and is very quickly absorbed into your skin. I’ve used it regularly throughout my pregnancy. It’s also great for dry skin, and I sometimes add a drop of it to my moisturiser in the winter months. It costs £8.99 for a 60ml bottle and does last quite well, a little goes a long way. I’ve used it a lot, and have only recently bought my second 60ml bottle.
Lush Lovely Jubblies breast cream is a product I’d heard lots of good things about. I tried it quite a while ago. It’s a nice cream which has a gorgeous floral scent, but I don’t find it to be a miracle cream. It does leave my skin feeling soft and supple, but it does cost £16.95 for a small tub.
I think my favourite is either the Bio Oil or the Silderm oil. Obviously there are no guarantee’s, but I think it’s worth a try.