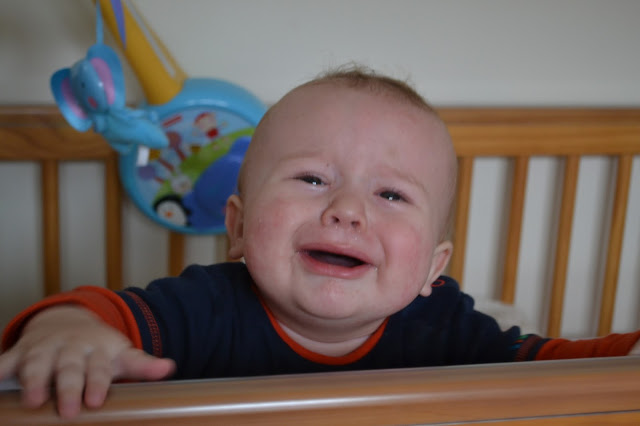 In the last week or so the little man seems to have gone from a happy, independent little soul to a clingy, teary nightmare. I literally can’t leave the room without tears, screams or where possible, him trying to frantically crawl after me. It’s obviously traumatic for him and very upsetting for me. His cot has become a place of terror and if I dare to sit him in it whilst I pop to the loo his cries can be heard down the street, we’ve taken to co sleeping because otherwise he’ll wake up in his cot screaming the place down and refusing to settle, if he sleeps in with his we all get a good nights sleep.

After much discussion with friends and family and the helpful world of Google it appears the little man may be going through the Separation Anxiety stage.

Separation Anxiety can become apparent when little people become upset or anxious with the prospect of being separated from a parent. I’ve been with the little man almost constantly since his birth 9 months ago. Obviously he spends time with his Daddy but he goes to work so I’m the one that’s with him 24 hours a day.

I’m worried about how upset he gets when I leave the room which is making the inevitable return work even more traumatic. I’ve been off work for a year and the thought of returning makes me feel physically sick. I feel like I’m going to miss out on so much. The little man isn’t too far off walking and I’m already worried that I’ll miss his first steps or hear him start to say new words.

He’s never been left with anyone other than my Mam, and that’s only been for a couple of hours at most. He enjoys her company because he has fun and he’s comfortable with her because he sees her a lot. That doesn’t stop me worrying about my return to work on the 1st of January and that I’ll be away from him for over 12 hours at a time.

I enjoy my job although it’s very stressful. I work 12 hour shifts which are either 7am – 7pm day shifts or 7pm – 7am night shifts. They’re long shifts, and there’s no down time, I have to be awake and alert for the full 12 hours I’m at work, lives can depend on it. It is quite a rewarding job though and I do mostly enjoy it. I had asked to return to work part time but that was refused, thankfully though I’ve found another lady who has had a baby, to job share with. This means we will split one full time role between us, working half the hours each, sadly though, this won’t come into place until June when she returns from Maternity Leave. That means I have 6 months of working full time before I can drop any hours.

Over the next few weeks I’m going to try and encourage him to spend time away from me and leave him with my Mam more to try and make the change less stressful for him.
He’ll be staying with her while Hubby and I are at work so I want to make sure he doesn’t get upset, particularly when he’s without Hubby and I for such long periods of time.
Some other things we intend to try to reduce the little mans Separation Anxiety –
Did you little person have separation anxiety?
How did you cope when you return to work?